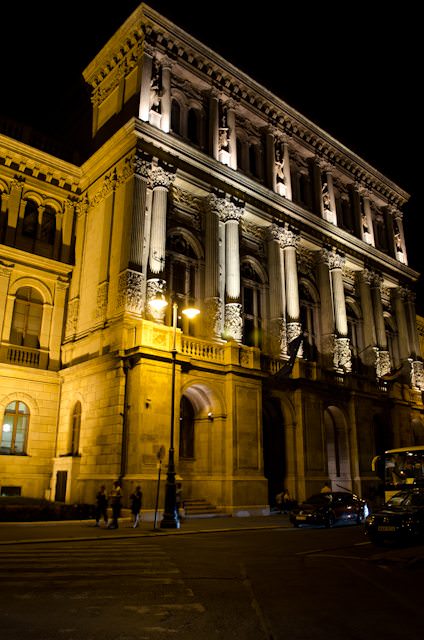 The Akademia Club in Budapest, Hungary was the site of tonight’s Welcome Dinner as we begin our 12-day river cruise tour with Tauck! Photo © 2012 Aaron Saunders

Last week, I arrived in Budapest to begin a 12-day river cruise tour aboard Tauck’s Swiss Jewel that would whisk me from the stunning capital of Hungary through some of Austria and Germany’s most fantastic ports before finally concluding in Prague. Here are some of my original thoughts of my arrival in Hungary last Thursday, as posted on Avid Cruiser sister-site, From the Deck Chair: 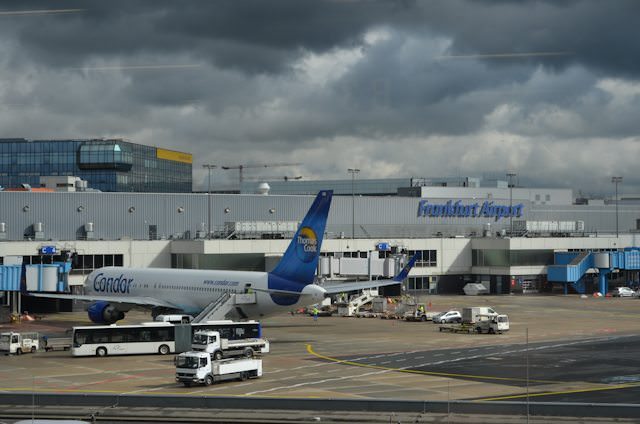 Stormy skies in Frankfurt pushed our flight to Budapest back by nearly an hour – but we still made it in time for dinner! Photo © 2012 Aaron Saunders

This afternoon, I arrived in Budapest, Hungary, ready and willing to pick up where I left off in December and to let Tauck act as my guide on this remarkable, 12-day river cruise tour voyage. But my inbound flight from Frankfurt arrived late, leaving me frayed and tired. Like a superhero to the rescue, Tauck took over and immediately began to impress. 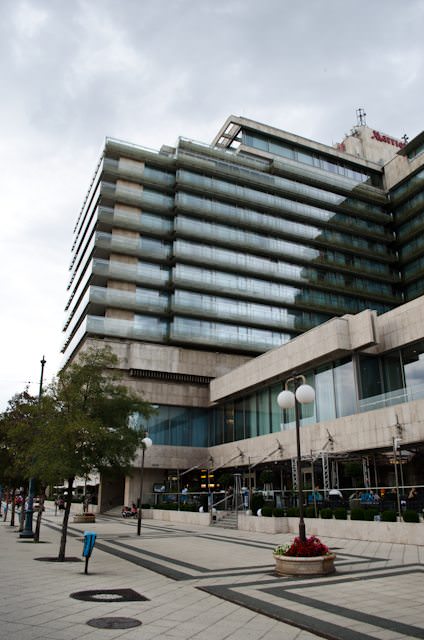 The Budapest Marriott, situated on the banks of the Danube, is our land-based home for two days before we board Tauck’s Swiss Jewel on Saturday. Photo © 2012 Aaron Saunders

Although he took a little finding, the promised Tauck representative checked the small group of us against his list, and then took us out to a waiting Mercedes min-bus. Our luggage was loaded for us onto the van, and we set out for our home for the next two days: the Budapest Marriott, located right next to the famed Danube River between the Elizabeth and Chain bridges. 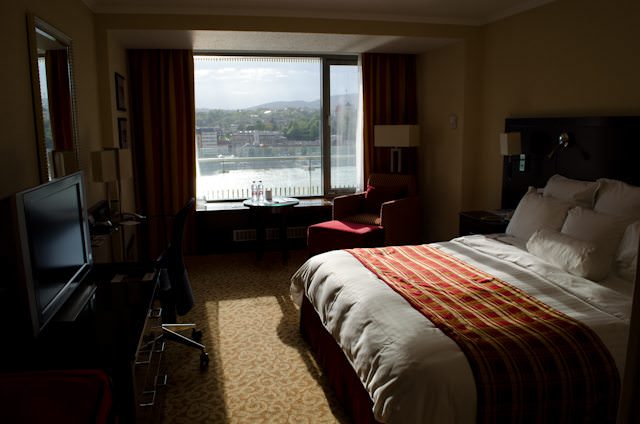 Within five minutes of arrival at the Marriott, I was in my room. How? Tauck handled all the check-in formalities for every guest, along with all applicable tips and gratuities. Photo © 2012 Aaron Saunders

Once at the hotel, Tauck Directors Stacie and Christine met us with wide smiles ad open arms. They addressed each of us by name and handed us an information package covering the next two days until we board the Swiss Jewel on Saturday. We were also given the opportunity to fill in any information that may have been missed on our original booking statement, and to choose meals and shore excursions for our upcoming special events. 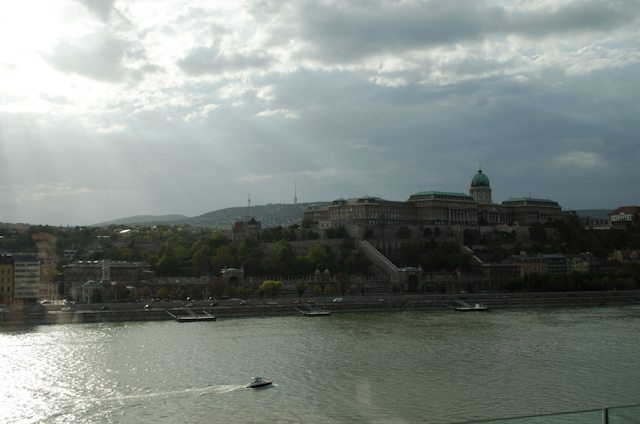 But what I truly, truly appreciated after 15 hours in transit: Christine handed me, and every other guest, our room keycards, thereby eliminating the need to stand in a long queue at the reception desk. With it already being 4:20 at this point, the careful thought and time put in by the entire Tauck team allowed me to freshen up, change, and even stroll around the neighborhood before our 6 p.m. dinner. 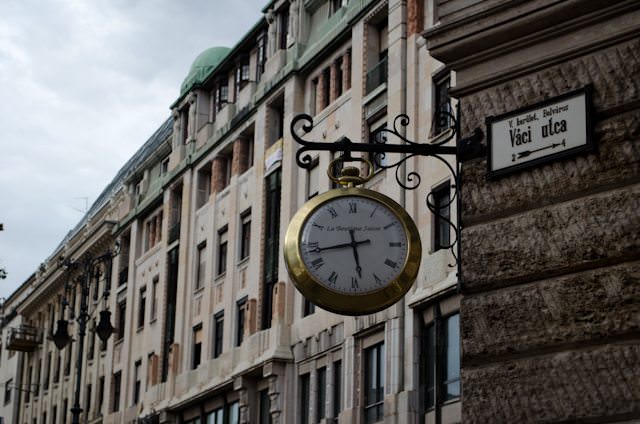 Even with my late arrival, Tauck’s efficient planning let me take a quick walk before dinner – something I sorely wanted to do! Photo © 2012 Aaron Saunders 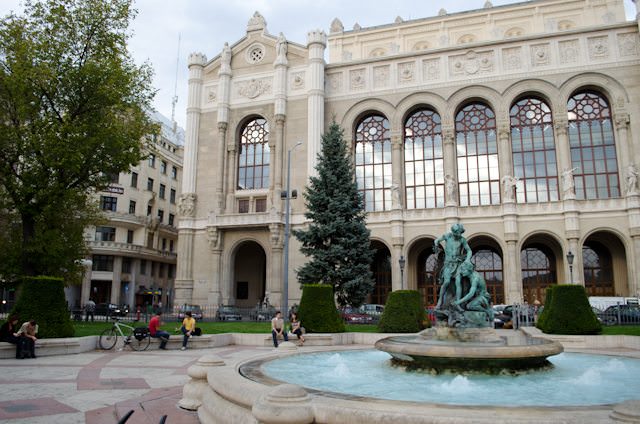 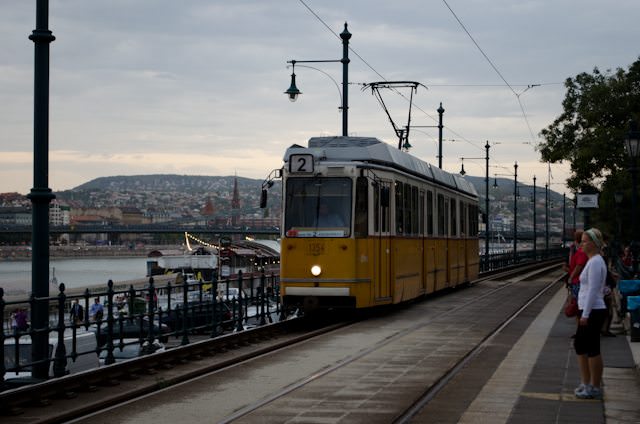 Electric trams like this one criss-cross Budapest, and are a convenient way to get around if you prefer not to walk. Photo © 2012 Aaron Saunders 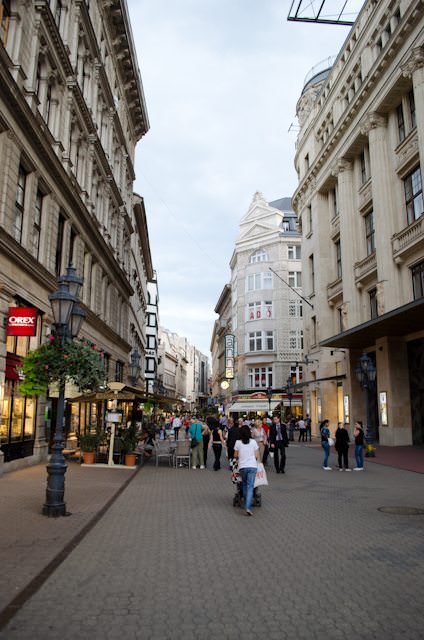 I may have only been in Budapest for two hours when we set off for our first organized activity this evening, but the Tauck spirit quickly shone through when we arrived at the gorgeous Akademia Club in the Hungarian Academy of Sciences, just a stone’s throw from the Marriott and the equally-beautiful Chain Bridge.

Here, all 107 of us that are participating in this 12-day Blue Danube voyage were treated to a private welcome reception at the Club to officially kick off our river cruise adventure. 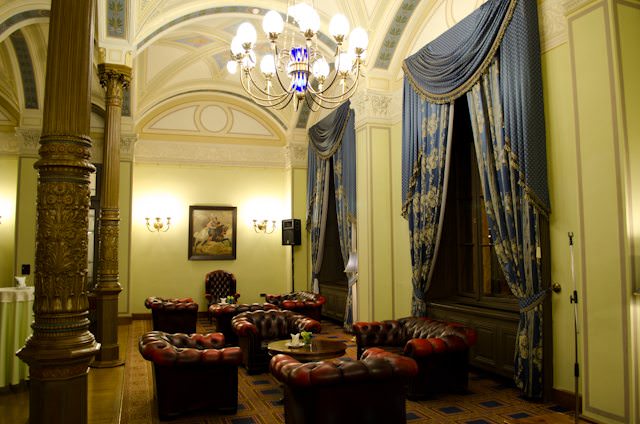 The Akademia Club: the perfect setting for drinks and dinner on our first night in Hungary, courtesy of Tauck. Photo © 2012 Aaron Saunders

Ensconced within a private room decorated with period works of art and accompanied by live music, the vino was flowing as guests got to know each other. The vast majority are from the United States, with two Canadians (one of which is yours truly), and a handful of Australians. The average age on this river cruise sailing also skews a bit older than on my previous river cruise experiences; but let’s be clear: that’s more of a qualifier than a negative, and not at all surprising given the length of the cruise and the time of year. 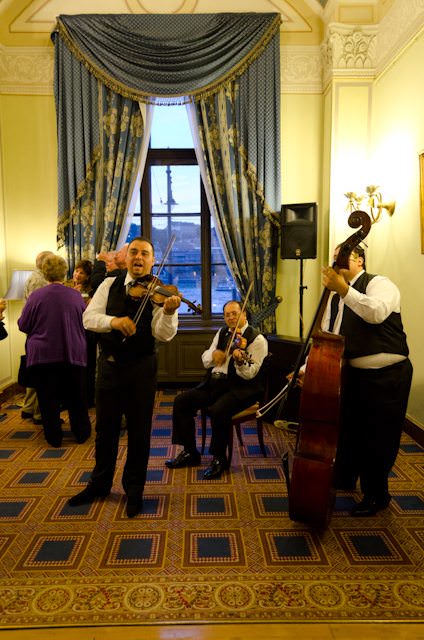 Live music during both drinks and dinner helped set the stage; the year could have easily been 1912 – it was that convincing! Photo © 2012 Aaron Saunders

Over wine and dinner, I learned many people here fall into one of several distinct categories: they’ve never river cruised; they’ve river cruised, but not with Tauck; or they’ve done land tours with Tauck before and are looking to take things to the next level. For the latter group, I can see why they’ve decided to try river cruising a ’la Tauck: the line makes enjoying your vacation a deceptively easy affair. You don’t have to worry about tipping the porter or the bellhop, or luggage handlers shoreside: Tauck has taken care of them already for you. 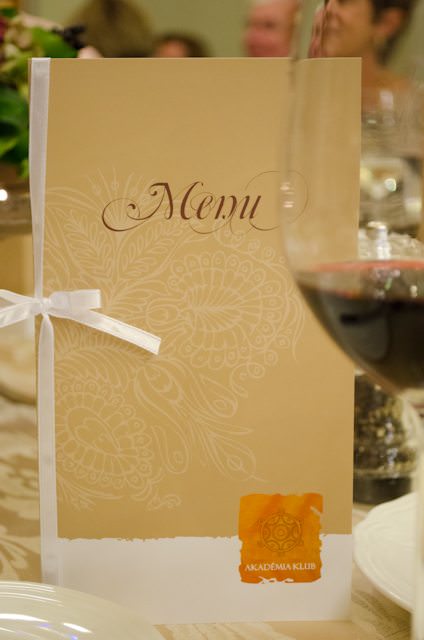 A menu created specially for Tauck guests by the Akademia Club in the Hungarian Academy of Sciences. Photo © 2012 Aaron Saunders

In my opinion, the Tauck Welcome Dinner was an absolute smashing success; live music and an intimate dining venue in a well-appointed library had us all feeling like kings of a bygone era. It’s also a stunning introduction to the world of Tauck; this kind of dinner at the Akademia Club isn’t something you could just drop in on independently. Instead, our dedicated Tauck Director Team – consisting of Stacie, Christine and Andy – have taken care of every detail for each one of us. Christine even took special pains to let me know that they’d replace the scheduled Marzipan dessert with a fruit platter for me due to my nut allergy. 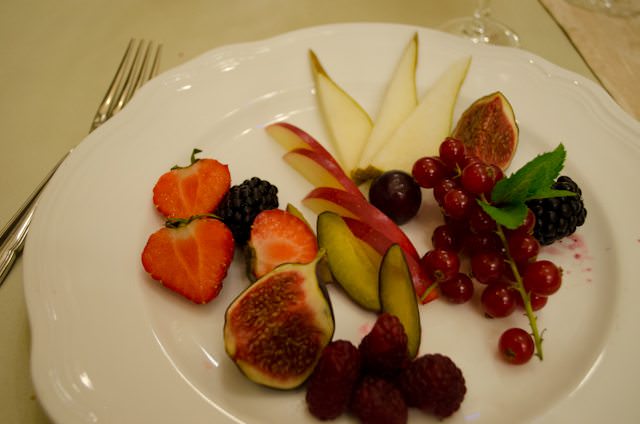 A special treat for yours truly: Tauck and the Akademia Club were sensitive to my nut allergy, bringing me fruit instead of Marzipan. I only wish it were this easy everywhere else! Photo © 2012 Aaron Saunders

Now, something interesting happened over dinner: we enjoyed ourselves so much that we lost track of the time. A little after 9 p.m., Andy apologetically called out that it was time for us to mosey onward. I wasn’t even aware of the time. And still, no one really moved! It is a great sign that Tauck have done their jobs right when the guests are entranced on day 1.

From an operational standpoint, I’m sure it would have been easy for Tauck to say, “Let’s just hold the welcome dinner in the ballroom at the hotel.” But instead, they opted to give their guests a true once-in-a-lifetime experience. 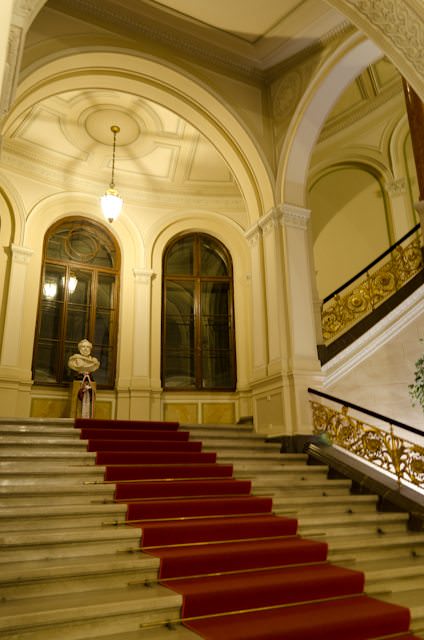 After leaving the Akademia Club, I opted to walk back to the Marriott – an easy 10-minute stroll past the Chain Bridge and along the raised banks of the Danube. It feels amazing to be back here; there’s something beautiful and vibrant about this city at night that it lacks during the daytime. Budapest has a very mysterious quality about it at night, and I am looking forward to exploring it in more depth tomorrow.

But as I rode the elevator back to my room, I couldn’t help but think that if Tauck’s Directors were able to weave their magic so well in a hotel they don’t own, and at a restaurant they don’t personally operate, just think of what they can do aboard the Swiss Jewel! 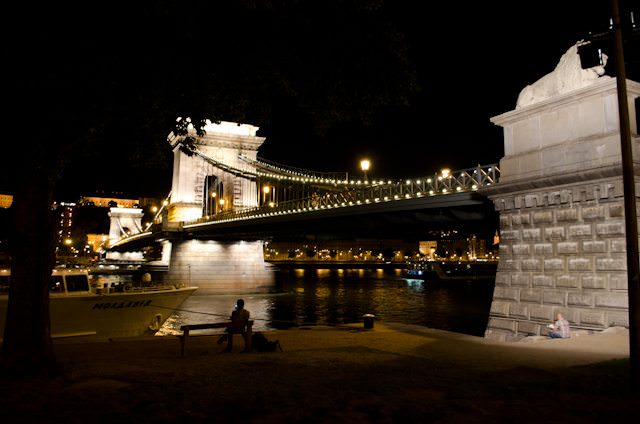 Our Live Voyage Report onboard Tauck’s Swiss Jewel continues this week, and we will continue to post our thoughts both here and on our sister-site, From the Deck Chair, which has daily updates from along the Danube!