You are here: Home / Destinations / Europe / Austria / A Day in Vienna, Austria 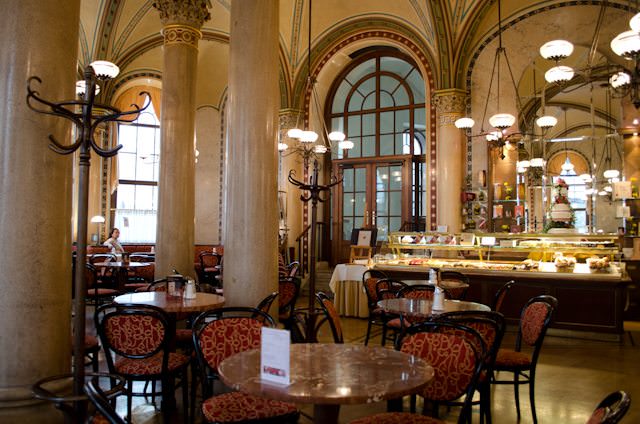 A few weeks ago, guests aboard Tauck’s Swiss Jewel — including myself — had the opportunity to spend the day at their leisure enjoying all that the historic city of Vienna had to offer. What follows is my first-hand report of a wonderful day spent enjoying Vienna’s sumptuous “cafe culture.”

Once again, getting into Vienna couldn’t have been more straightforward: Tauck arranged for shuttle busses at 9 a.m. and 9:30 a.m. that would transport guests from the dock to the Albertina, located near the famous Sacher Hotel and the Hofburg. 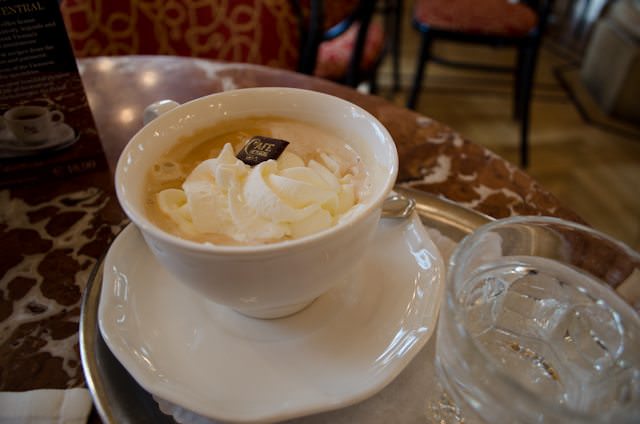 Many guests were interested in visiting the Belvedere, while a large portion had made reservations to view the famous Lipizzaner Stallions strut their stuff. In both cases, Christine, Andy and Staci — our Tauck Directors — made special arrangements to ensure guests got to their desired locations. Such a high level of service is great for Tauck’s clientele, many of whom are making their first visits to Vienna and can be still unsure of their bearings.

I used this free day to combine work with pleasure by visiting the Café Central at Herrengasse 14. Arriving just after 9:30 a.m., I had my pick of the tables, which gave me the opportunity to photograph the restaurant when it was nearly empty. By 10 a.m., however, hardly a seat was free. 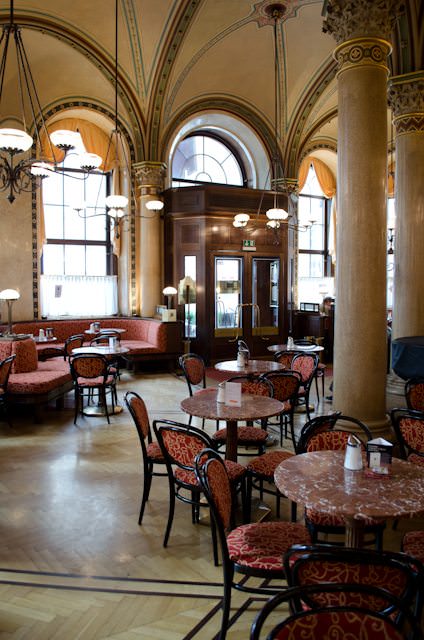 The Cafe Central has played host to many famous figures throughout history . . . and now one bespectacled cruise enthusiast. Photo © 2012 Aaron Saunders

There’s good reason for that: Anyone who was (or would be) anyone in the last century was seen here, including Lenin, Hitler, Trotsky, Freud and Josip Broz Tito. I had wanted to come here last December but I kept getting turned around; it turns out I was looking too hard: I’d come within a block of the Café Central before deciding to head elsewhere.

Today, though, I treated myself to coffee with apricot brandy and whipped cream, along with some plain yogurt as a bit of a late breakfast add-on. Total cost: under €10. But the pleasure of relaxing in this beautiful and historic café would have been worth double the price. I almost considered hanging out for lunch (there’s no time restrictions on how long you can occupy a table), but I had itchy feet to go exploring. 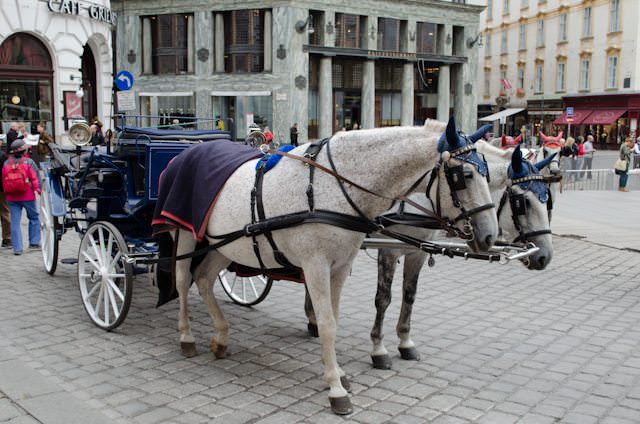 Some decidedly old-world transportation outside of the Hofburg. Photo © 2012 Aaron Saunders

Need to use Wi-Fi while you’re in Vienna? No problem; nearly all Cafe’s — including Cafe Central — offer it free of charge.

By the time 11 a.m. rolled around, I figured I should be moving along. I strolled two blocks back, past the Hofburg and into the magnificent Austrian National Library’s Prunksaal, or Splendor Hall. 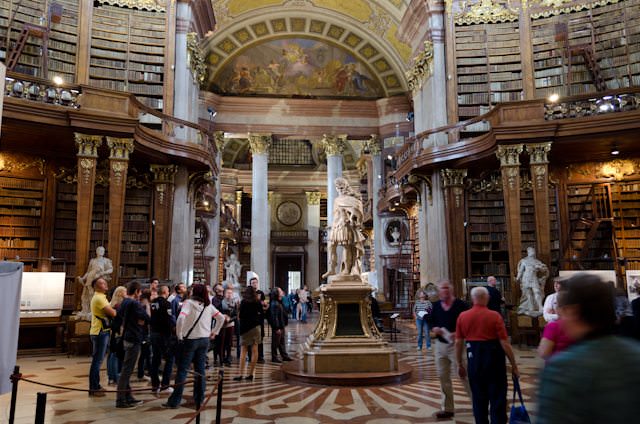 The Austrian National Library is stunning and must be seen to be believed. Photo © 2012 Aaron Saunders

Its name is decidedly appropriate: The hall is stunning, with vaulted ceilings, gold accent work and murals that rival even the finest cathedral. More than 200,000 books are held here, and some extremely rare samples are on display, such as a book written in Arabic during the 1400’s. For €7 admission, it’s well worth it if you have never been, or if you have any interest in architecture or ancient manuscripts.

After doing a little shopping, I decided it was time to come back to the soothing paradise that is the Swiss Jewel. To make things easy, Tauck ran shuttle busses from the Albertinaplatz to the ship at 12:30, 2:30, 3:30 and 4:30 p.m., all of which would meet our 5 p.m. departure time as we sail to Durnstein, Austria, later tonight. 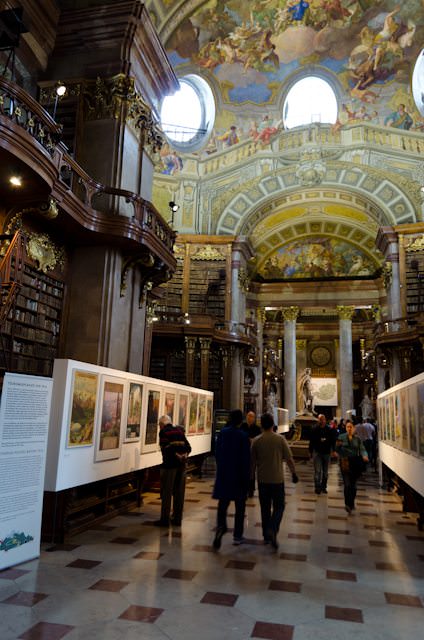 I returned on the 2:30 shuttle bus, dropped my things in my comfortable stateroom, and headed back out. Checking on and off the ship works a little differently here than on a large cruise ship; instead of swiping your keycard through a reader, keycards are exchanged at the front desk for a “shore pass” card that can be carried ashore, and can also open the vessel’s exterior doors during overnight calls. 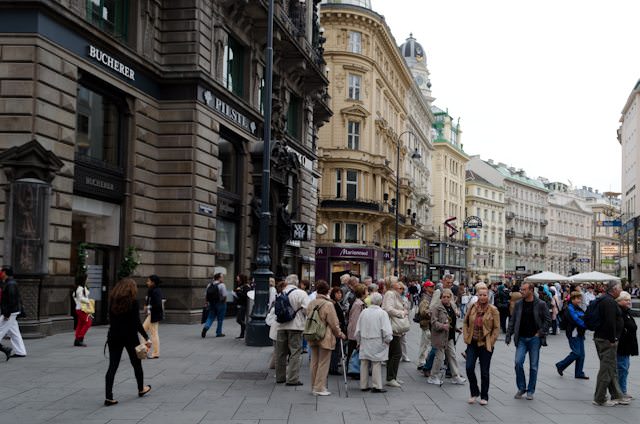 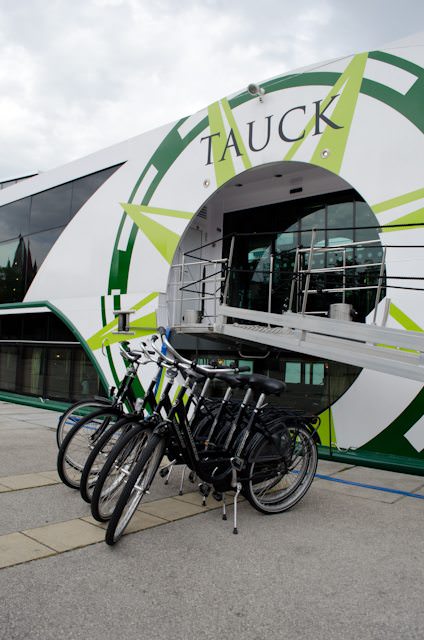 The bikes are offered to guests on a complimentary basis; there’s no forms to sign or deposits to leave. Just check with the front desk, which will unlock the bike, and you are ready to go.They’re also quite easy to ride, with no gears to shift or handlebar brakes to work (pressing backward on the pedals stops the bike.)

I rode along the pierside here in Vienna for about two kilometers before crossing a bridge over to Donauinsel, a small island cut in between the Danube and “New Danube” channels that lie just outside of Vienna. Riding around Vienna in the rain. With a camera. Photo © 2012 Aaron Saunders

Even though it poured rain halfway across the bridge, I had a great time and hope to set out in Durnstein tomorrow to explore the countryside of Austria via bicycle. Plus, I will need the exercise with all the great food being served each day here on the Swiss Jewel.

This evening, the sun came out and shone brilliantly for our departure; it’s as if the weather is putting on a tremendous show for us each and every day. In fact, today was our first mainly overcast day — some six days after the start of this journey. 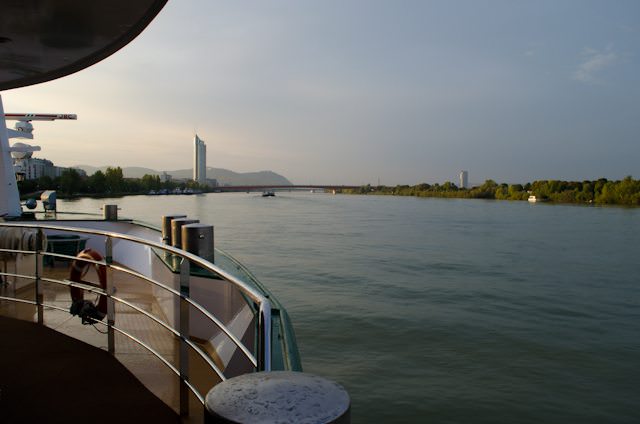 Departure from Vienna under a brilliant sunset. Photo © 2012 Aaron Saunders

With an evening of cruising the Danube ahead of us, things are in full swing here on the Swiss Jewel. At 6 p.m., it was time for everyone’s favorite event: Happy Hour in the Main Lounge on Deck 3 forward. And who can complain about half-price drinks coupled with stunning views? 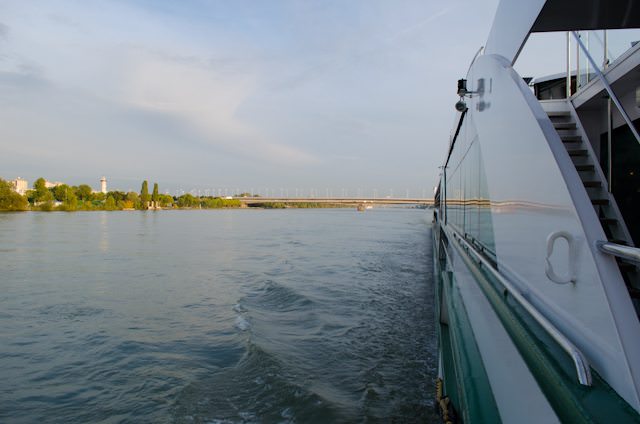 Looking back along the side of the Swiss Jewel as we made our way out of Vienna, my favorite city. Photo © 2012 Aaron Saunders

To make things more interesting, our Cruise Director Steve held a friendly competition tonight: the quest to see who had acquired the most interesting, original image of Wolfgang Amadeus Mozart here in Vienna. His visage is, of course, everywhere: from little figurines to tour busses to Mozart Impersonators. He’s even splashed all over the little chocolate and nut-filled balls that also bear his name. 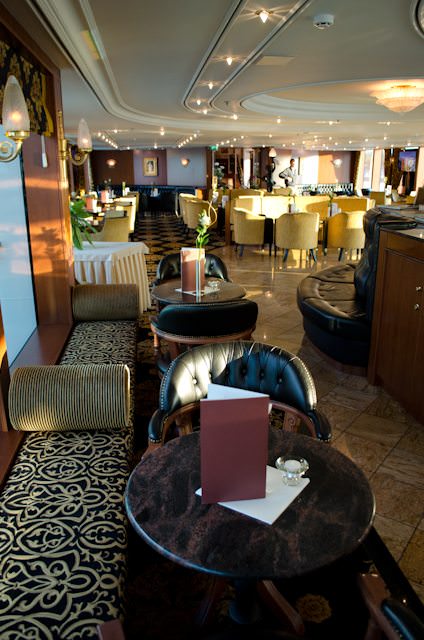 We also had our daily Discovery Briefing during Happy Hour, which provides guests with a chance to ask questions about what they saw today, and to prepare them for our exciting day in Durnstein tomorrow.

Dinner was served in the Main Dining Room on Deck 2 from 6:30 to 8:30 p.m., and in the Lido Bar from 7:00 p.m. If you’re booked on Tauck in the next little while, run, do not walk, to this stunning venue. It hasn’t seemed to catch on yet on my sailing, but I hear it can be packed on others. You can’t go wrong with the beautiful aft-facing views, stunning cuisine, and dedicated, intimate service here. 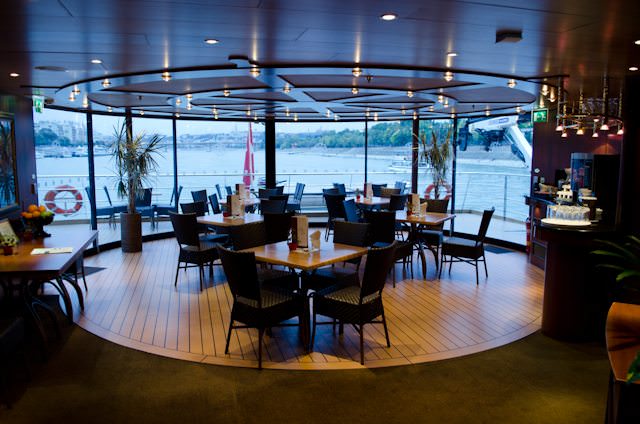 Not that the main dining room is any slouch; this morning at breakfast, I enjoyed a double espresso followed by one of the best cappuccinos I’ve ever had, courtesy of the always-smiling Dana. Coffee barely goes empty before it is re-filled, and water, juices, teas and soft drinks are always on-tap. With lunch and dinner, the wine and beer is complimentary — and free-flowing; there’s no rationing of any sort going on. What’s more, Tauck serves up some darn fine wines to accompany each meal. 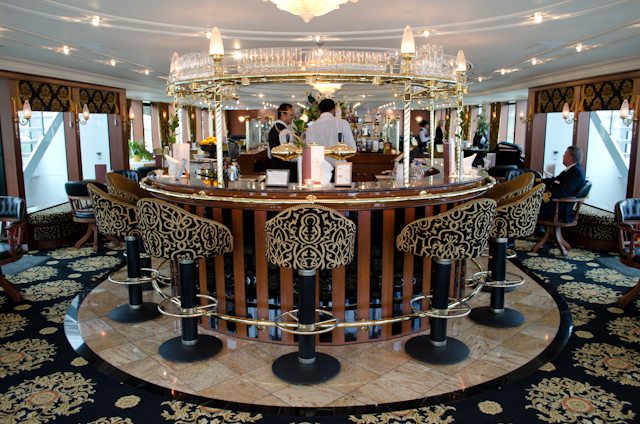 Another shot of the Main Lounge aboard the Swiss Jewel. Photo © 2012 Aaron Saunders

While the average age here on this particular trip is skewing a little older than I had envisioned, I have this to say to everyone reading this: If you haven’t tried river cruising, you owe it to yourself to. Tauck makes it ridiculously easy to enjoy the entire experience, from the moment you touch down to explorations in each city. Be sure to check out Tauck Bridges, a series of specially selected river cruise sailings that are designed for multi-generational families and friends to cruise together. Active, stimulating and always accommodating, these sailings would be perfect for river cruisers of all ages. 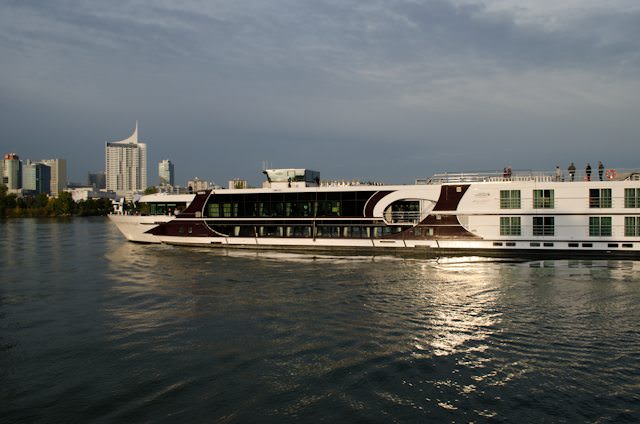 A ship next to us departs Vienna in the glow of the setting sun. Photo © 2012 Aaron Saunders

But even as the only 30-year old onboard aside from the crew, I am enjoying myself thoroughly. And how could I not? The ship is gorgeous, the ports are stunning and the entire experience has been wunderbar indeed. 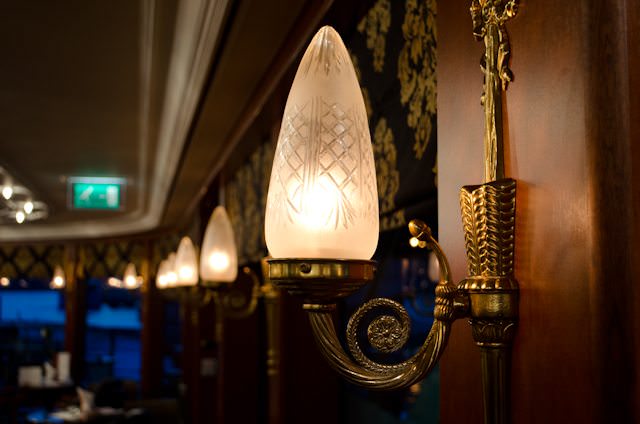 Thoughtful design touches are to be found everywhere throughout Tauck’s Swiss Jewel, like this Edwardian light sconce. Photo © 2012 Aaron Saunders