If you’re on the lookout for a river cruise to take in 2013, you might want to consider one of Uniworld Boutique River Cruises’ newest offerings: an eight-day voyage down the Danube from Vienna to Belgrade that the line has dubbed its Highlights of Eastern Europe.

New for the 2013 season, the eight-day Highlights of Eastern Europe can be booked from Vienna to Belgrade, or Belgrade to Vienna. Regardless of which direction you choose, the recently refurbished River Ambassador acts as your home for just over a week, offering up Uniworld’s decidedly European onboard style and flair. 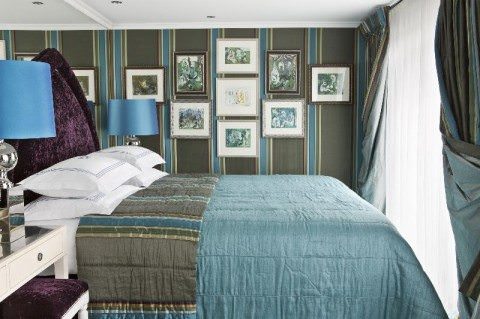 One of the colorful suites aboard Uniworld’s River Ambassador. Photo courtesy of Uniworld River Cruises

Two days are provided in Vienna, allowing guests the opportunity to experience this vibrant Austrian culture capital by both day and night. Choose to take part in a complete city tour of Vienna, or “See Vienna as the Viennese Do” by taking the subway to the city center for a day of exploration before the crowning end to a perfect afternoon: coffee at a traditional Viennese coffee house.

Heading East along the Danube, the River Ambassador calls on the cozy Medieval town of Bratislava before arrival in the Hungarian capital of Budapest. Here, you can indulge in the beauty of both Buda and Pest (they’re separated by the Danube) through a comprehensive city tour or set out on foot for a walking discovery and a visit to the strikingly beautiful Hungarian Parliament. Should the Parliament be closed, a visit to the imposing St. Stephen’s Basilica will be substituted.

After Budapest, it’s on to Vukovar, Croatia, gateway to the town of Osijek, where guests can visit a local elementary school for a performance by the children before enjoying a home-hosted lunch with a Croatian family.

Finally, this eight-day journey concludes with a day spent in the fascinating Serbian city of Belgrade, where guests can experience the Kalmegdan Fortress on foot.

On offer between May and September of 2013, this is a great itinerary for those who want to experience a touch of Eastern European culture, history and charm.

More information on Uniworld Boutique River Cruises and its River Ambassador can be found by viewing our Uniworld company and fleet overviews right here on River Cruise Advisor.