If you’ve never taken a river cruise before, there’s one – well, actually two – items in your stateroom that you may not recognize: the QuietVox audio system.

Sitting in a charger base on your desk or vanity area, these two battery-operated receivers come with two sets of headphones and are used on nearly all shore excursions offered by the cruise line. They’re exceedingly common in the river cruise industry, but QuietVox technology is just beginning to catch on in the deep-ocean cruising world.

Here’s how they work: The neck rope and headphones clip into the receiver, allowing you to carry the package in one go. I don’t want to look like a tourist, so I slip the receiver underneath my jacket and wire the single headphone up so that it comes out of my coat or collared shirt.

While the thought of wearing a receiver around your neck might take some getting used to, what doesn’t is how well these units work, and the level of freedom they provide you.

We’ve all been there at some point: Standing among a group of 30 in some cathedral that’s older than time, unable to hear as the guide strains to impart its diverse history on you in the time-honored “yell-whisper” that tour guides have perfected to a science. Equally frustrating can be standing in a large square, remaining clustered in that same large group, struggling to hear your guide over traffic, passersby and whatever else may come your way. 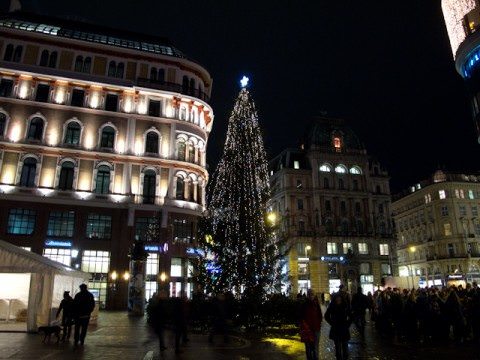 You can still hear your guide loud and clear via the QuietVox headsets – even in this crowded square in Vienna, Austria. Photo © 2011 Aaron Saunders

But with the QuietVox receiver and earpiece, you have the freedom to move about while on tour. Your guide will tell you to activate the headset by turning the receiver on, and standing in proximity to your guide ensures the set automatically picks up the proper frequency. After that, you just listen – it’s that simple.

The Quietvox gives you the ability to wander and go where you want to go and see what you want to see, all while being in constant contact with your guide, who can impart the history of a particular place on you, or tell you when the group is on the move again.

I enjoy taking photographs when I travel, but many times, this means wandering away from the group in order to get the shots I want and still be able to keep up with the tour. So I decided to test the wandering capabilities of the QuietVox in one of the most crowded places I could find: in front of St. Stephen’s Cathedral in Vienna, Austria. I was able to walk nearly two blocks away and purchase some of the city’s iconic treats, dubbed Mozart Balls, from a chocolate shop.

I don’t advocate wandering too far from your tour unless you know the city you’re in – but in enclosed locations, like Europe’s many Cathedrals, this kind of technology enables you to truly do what you want and see what you’d like — all without ever stepping out of earshot.