As we alluded to on New Year’s Day, this could be one of the best years to take a river cruise – ever. The number of new ships launching on the waterways of Europe alone is remarkable enough, but six of them will belong to a single cruise line – and they have the potential to be a real game-changer.

Here’s a rundown of the ship launches we’re eagerly awaiting in 2012:

California-based AmaWaterways takes the evolution of its popular river cruise vessels to the next level this April with the launch of its newest ship, the 164-passenger AmaCerto. 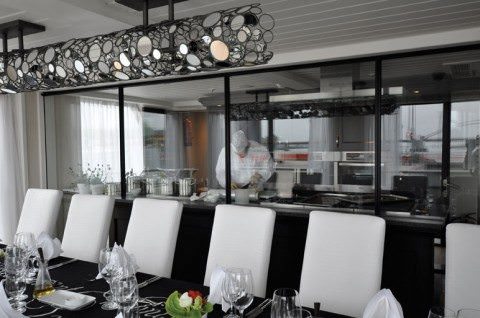 The Erlebnis Chef Table Restaurant aboard AmaCerto will mimic that of her sister, AmaBella. Photo courtesy of AmaWaterways

Fans of the line’s entire fleet of casually elegant ships will find plenty to like about the AmaCerto. She continues the trend started by the popular AmaBella and AmaVerde of offering staterooms that feature both French and Outside Balconies. Dubbed “Twin Balconies,” these luxurious rooms range from 210 to 235 square feet, and make up the bulk of the accommodations aboard AmaCerto.

Guests who crave additional dining options will want to check out the intimate Chef’s Table restaurant, which serves up delicious fare in addition to the main Restaurant on Cello Deck. There’s also a casual, Al Fresco bistro on board, two wine bars, and the line’s signature lounge located all the way forward. A heated swimming pool with a swim-up bar is located on the Sun Deck, and every AmaWaterways’ ship features complimentary Wi-Fi and in-stateroom internet access, wine, beer, soft drinks and spirits with dinner, complimentary use of bicycles, and a host of free, first-run Hollywood movies. 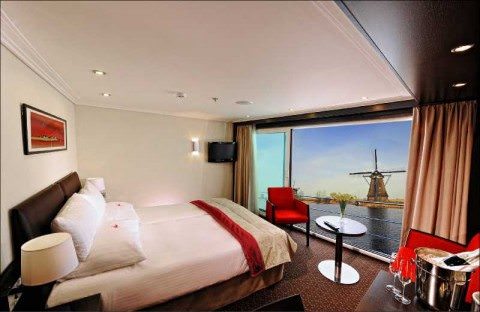 One of the spacious Panorama Suites aboard Avalon Visionary. Photo courtesy of Avalon Waterways

At 361 feet in length, Avalon Visionary is closer in size to the 2010-built Avalon Felicity. Two full decks of suites feature wall-to-wall panoramic windows that open to create what Avalon has dubbed an “Open Air Balcony.” In fact, these rooms were so popular that there are 53 of them aboard Avalon Visionary, in comparison with just 12 standard staterooms. And at 200 square feet, they’re comfortable too.

Avalon raises the bar in 2012 by offering its guests complimentary Wi-Fi internet access, along with the complimentary use of Apple iPads for guests staying in the ship’s luxurious Royal Suite accommodations.

Avalon Vista, on the other hand, is a sister-ship to the 443-foot Avalon Panorama that launched last year. She features all the new enhancements bestowed upon her smaller fleetmate, but with additional staterooms and suites – 17 staterooms and 66 suites, to be exact. Guests can also look forward to dining in the ship’s Open-Air Bistro, exercising in the expanded fitness centre, and even onboard movie nights.

This year, Viking River Cruises will make a bold power move when it launches not one, but six ships – all in a single year. In fact, four of them will be christened and enter service in a single week in Amsterdam this March: Viking Freya, Viking Idun, Viking Njord and Viking Odin, with Viking Aegir and Viking Embla launching later in the year. 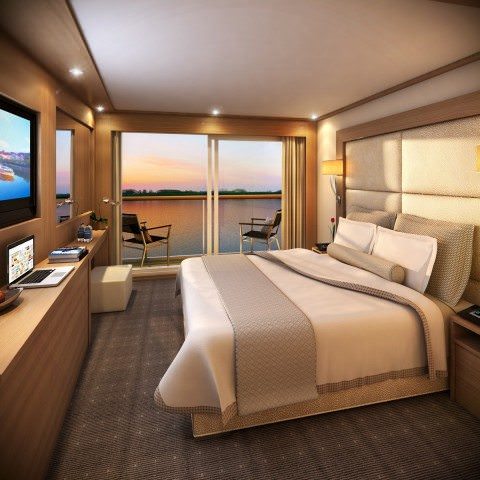 While many of the other ships set to launch this year are evolutions of current designs, the Viking Longhips are a brand-new class of ship for the line, and an ambitious one at that: They were designed by the experienced team at Yran & Storbraaten, the firm behind deep-ocean cruise ships like Seabourn Quest, who have given them some decidedly deep-ocean features.

Two Explorer Suites will feature 270-degree views of the surrounding waterways and will feature a private wraparound veranda. In fact, the list of staterooms rattles off like a veritable array of candy in a sweets shop: 2 Explorer Suites; 7 Veranda Suites, 39 Veranda Staterooms, 22 French Balcony Staterooms and 25 Standard Staterooms. It’s also worth noting that every suite will feature a dual French and full balcony, in what is quickly becoming one of river cruising’s most popular trends.

In the end, we’re excited about each new ship coming to the waterways of Europe this year – but our imaginations have been firmly captured by the forthcoming Viking invasion.

Stay tuned to River Cruise Advisor for full coverage of these and other exciting debuts!