Much like their deep-ocean counterparts, river cruises tend to have high and low seasons. The summer months of June, July and August are prime, when sailings (and prices) are at their peak. The spring months are also exceedingly popular, particularly the much-cherished Tulip Time cruises that sail in and around the Netherlands during April and May. December is another popular time for river cruises, thanks to the old-world charm of a Europe blanketed with snow. Many European cities put up a Christmas Market – essentially an open-air market – complete with decorations, gifts, and exceptional food and drinks. Picture sipping hot mulled cider in Prague and you’ll get the idea.

But the industry has historically had a significant downturn during the months of October and November. The passengers that filled the ships during the summer are gone, replaced with the passengers eagerly awaiting their Christmas Markets cruise.

California-based AMAWATERWAYS wants to change that. Beginning this fall, they’re offering a series of departures focusing on Europe’s most acclaimed winemaking regions along the Rhine, Mosel and Danube rivers. Each cruise will be hosted by wine experts and AMAWATERWAYS executives, and will include special wine pairings at meals. Onboard lectures, tastings and specially designed shore excursions round out the wine theme on these voyages.

You don’t have to be a lover of the grape to fully enjoy these sailings, though. Six distinct week-long voyages are on offer, each with its own hidden treasures and remarkable experiences in some of Europe’s most picturesque cities (click each date to launch a PDF of the full itinerary):

Vineyards of the Rhine & Mosel – from Amsterdam to Luxembourg. Departs October 13 and November 9, 2011. An optional three-night stay in Paris is available on these sailings.

The Romantic Danube – from Vilshofen to Budapest. Departs November 10 and November 20, 2011. An optional three night stay in Prague can also be added to these sailings.

The Enchanting Rhine – from Basel to Amsterdam. Departs November 7, 2011. An additional two nights in Zurich and two nights in Lucerne can also be added for those looking to extend their European vacation.

Europe’s Rivers and Castle – from Nuremberg to Luxembourg. Departs November 3, 2011. An additional two nights in Prague and three nights in Paris can also be added to this itinerary.

In addition to the aforementioned wine-related activities, every voyage includes complimentary wine, beer and soft drinks in addition to complimentary in-stateroom movies, complimentary Wi-Fi, and complimentary tours ashore. Entertainment is provided each and every evening, but that’s only if you can drag yourself away from the comfort of your stateroom, 80% of which include French balconies. 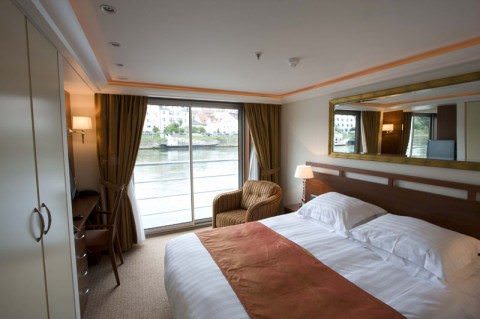 There are some compelling economic reasons to want to cruise the waterways of Europe in the fall: for starters, transatlantic flights from North America are typically at their lowest prices of the year before rising slightly for the holiday months of December and January. For many, airfare to Europe can be a huge stumbling block; by travelling in the off-season, you are able to secure a far better deal than you would otherwise get in the high summer months of July and August.

To top that off, hotels generally offer lower rates in the fall, making that pre-or-post cruise stay more affordable.

Weather-wise, passengers can expect the best of both worlds on a fall river cruise. While not as warm as the summer months, fall in Europe can be spectacular. All you need to do to enjoy yourself is bring some warmer clothing and perhaps an umbrella in case of rain. Snow is also possible during the late November sailings but again, this is what people pay top dollar to see in December; the only thing missing from many November sailings are the actual Christmas Markets themselves. In some cases, like AMAWATERWAYS November 20th departure, expect the Christmas spirit to be in full swing, as many cities and towns begin holiday festivities during the last week of November.

If you’re looking for a great river cruise that won’t break the bank, seriously consider one of these fall sailings. You’ll find the benefits of travelling in the off-season far outweigh the drawbacks.