Hot on the heels of its ambitious Viking Longships newbuild announcement, Viking River Cruises is once again shaking things up with the launch of the brand-new Viking Prestige, set to be christened on June 30, 2011 in the beautiful port of Amsterdam, Netherlands.

After officially entering service under the watchful eye of godmother Janice Farrar Titus, wife of the late cruise industry innovator Warren Titus, Viking Prestige will carry her 188 lucky guests on a 15-day Grand European Tour before commencing her regular schedule on the popular 8-day Romantic Danube run between Budapest and Nuremberg.

“This is a proud time for everyone at Viking River Cruises,” said Torstein Hagen, Chairman of Viking River Cruises. “I also find great significance in having Mrs. Titus as the ship’s godmother, considering my unparalleled respect for Warren Titus and his contributions to our industry with Royal Viking Line and Seabourn. It is additionally appropriate because June 30, our christening date, would have been Warren’s 96th birthday.”

The second “green ship” after Viking Legend, Viking Prestige will boast the same efficient features designed to benefit both the environment and passengers alike.  At its core is a unique hybrid propulsion system that uses less fuel, produces minimal vibrations and offers passengers a smoother river cruise experience. 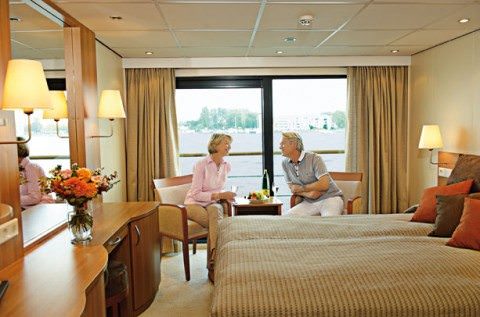 On board, Viking once again employed the talents of Yran & Storbraaten to work their magic on the ship’s interiors, drawing inspiration from one of cruising’s most celebrated forerunners: the much-beloved Royal Viking Line. Unobstructed panoramic views are featured in every public room, and every stateroom aboard Viking Prestige is an ocean-view stateroom. French balconies are on both Upper and Middle decks.

Viking Prestige is part of an ambitious $250-million fleet development program that was first announced last year. Between 2012 and 2014, ten new vessels will be constructed for Viking River Cruises, including the game-changing Viking Longships, an entirely new class of river cruise ship set to debut next spring.

Sailings on Viking Prestige’s inaugural season can still be booked through Viking River Cruises or your local travel agent.