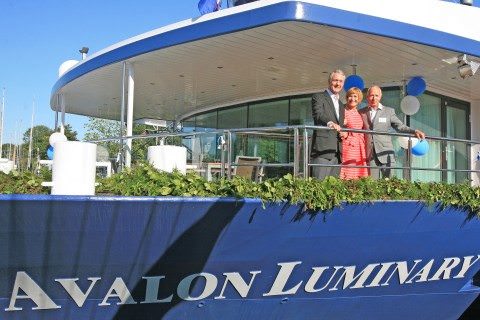 And, she’s off! Avalon Waterways christened its tenth ship, the Avalon Luminary, at a ceremony in the fishing village of Hoorn in the Netherlands last week.

The 138-passenger ship was christened on July 30 by its godmother, Kristi Jones, president of travel agency consortium Virtuoso.

The Luminary cabins also feature flat screen televisions, Comfort Collection by Avalon bedding, a mini-bar, safe, laundry and ironing services. The ship has a fitness room, library, hair salon and gift shop, as well as a club lounge, Jacuzzi and a Sky Grill for open-air lunches on the sky deck.

Arriving from the Den Breejen Shipyard in Holland, the Avalon Luminary marks the company’s tenth new ship in Europe since 2004.

In attendance at the christening were Thomas Ritter, CEO of Seehandlung, the financing company for the Avalon Luminary; the ship’s captain Michael Hoffman; as well as Patrick Clark, managing director of Avalon Waterways.

“Inspired by design, our ships are crafted to entice all five senses,” said Clark. “Some enhancements, including deluxe woven carpeting, bathrobes and slippers and premium L’Occitane products in our staterooms are subtle. Other offerings, such as Avalon-branded premium bedding, large staterooms and a perfect balance of warm interiors with natural lighting and panoramic views are distinctive and unexpected.  Combined, all elements provide travelers with a unique feeling of space, freedom and comfort.”

Following the christening, the new vessel set sail on an inaugural Romantic Rhine cruise.  The Luminary will sail the two 9-day itineraries between Amsterdam and Basel, and between Zurich and Amsterdam (both called Romantic Rhine) for the remainder of 2010. The ship will also sail Christmas in the Heart of Germany, Christmastime in Germany & Austria and Christmastime on the Danube.

In 2011, the Avalon Luminary will sail more than 10 Avalon itineraries throughout Europe, including the Tulip Time Cruise, Central European Experience, Magnificent Europe, The Blue Danube Discovery, The Legendary Danube, Windmills, Vineyards & Paris and a wine-themed cruise on the Rhine and Moselle rivers.

In May 2011, Avalon will be launching the Avalon Panorama, marking a new design for Avalon ships with 200-square-foot suites on the top two decks featuring floor-to-ceiling panorama balcony doors.