You are here: Home / Rivers / Africa / Nile River Cruises / Head down the Nile with Disney 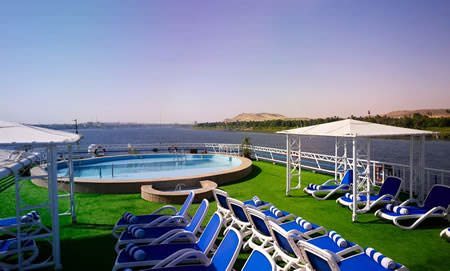 Adventures by Disney, The Walt Disney Co.’s family tour program, has introduced an Egypt itinerary in 2011 that includes cruising the Nile River.

In 2011, Adventures by Disney, which offers family vacations around the world, will be adding an eight-day “Egypt: Pyramids, Pharaohs & Ancient Treasures” vacation, which begins with three days in Cairo followed by a three-day cruise on the Nile River aboard the ship Tulip. An additional night in Cairo finishes the trip.

A second 10-day itinerary adds two days in Sharm el Sheikh, a resort destination at the tip of the Sinai Peninsula at the Red Sea.

While the itineraries include traditional sites such as the Pyramids, and important temples such as Luxor, Edfu and Karnak, they also include kid-friendly activities such as a ride on a horse and carriage through Luxor, an Egyptian cooking class and a Disney movie night onboard.

The Tulip is a 77-passenger Nile river ship owned by the Cairo, Egypt-based Wings Group. It was built in 1999 and renovated in 2009. It has five decks, on which there are 56 cabins, including 16 suites. There are four suite categories, including two royal panoramic suites, eight jacuzzi suites, four junior suites, and two executive suites.

There is internet service as well as laundry and dry cleaning services on board.