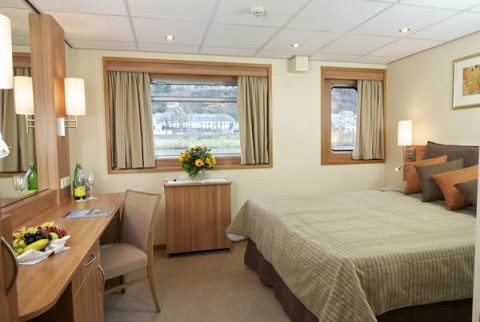 Viking River Cruises completed a $2 million gut renovation of the Viking Fontane, which relaunched on March 27, after being laid up since January for the winter.

Viking River Cruises has just completed a $2 million gut renovation of the Viking Fontane, which relaunched on March 27, after being laid up since January for the winter.

As part of the refurbishment, the 110-passenger Fontane, which was originally built in 1991, received eight deluxe category staterooms on its upper deck, each measuring 180 square feet and with hotel-style beds. Beds in the standard staterooms (categories A, B, C, D) have been renovated to include standard-size single beds, which are larger and more comfortable than the previous Pullman-style beds, according to Viking.

According to Richard Marnell, senior vice president of marketing at Viking, the Fontane was redesigned to be more consistent with the Viking Legend class of vessels with a Scandinavian aesthetic.

“We feel that 2010 is the perfect time to rollout our fleetwide update program in Europe, and it made sense to start with Viking Fontane, an intimate ship sailing one of our more popular itineraries,” Marnell said in a statement. “As with the recent rollout of refurbishments to our Russia ships, the modifications are not just soft renovations like carpets and drapes. We have invested in the ship with changes throughout and upgraded furniture to provide more comfort and category choices for our guests.”

The public areas such as the restaurant, bar and lounge, were also updated, but the staterooms received the most attention.

For 2010, Viking Fontane is sailing a 12-day Cities of Light itinerary from Paris to Prague, which includes an 8-day cruise along the Moselle, Rhine and Main Rivers plus two nights each in Paris and Prague. The itinerary includes multiple German ports including Trier, Cochem, Koblenz, Rüdesheim, Miltenberg, Würzburg, Bamberg and Nuremberg, plus cultural highlights such as a castle tour, wine tasting and a glassblowing demonstration. For travelers wanting a shorter trip, they can opt for the 8-day cruise-only itinerary, Vineyards & Vistas.