Over the past couple of years, river cruise companies have begun to put greater emphasis on their culinary programs, introducing new dining areas, hiring new chefs and even creating entire itineraries around food and wine, such as with Uniworld River Cruises’ Epicurean Adventures program, which includes cooking demonstrations (like the one pictured above).

“Food is an absolutely integral part of the entire river cruise experience,” said Joost Ouendag, vice president of product marketing for Viking River Cruises. “We don’t see it as detached from the rest of the cruise. It is connected with the landscape, the traditions and the people along the rivers.”

At the end of January, Viking invested $48,000 to bring its European food and beverage team to Southern California for nine days of wining and dining to get a better sense of the evolving American culinary experience.

“The most important thing we came away with is that the American palate is not a monolithic thing, there are many American palates,” said Ouendag. “It was a good refresher to see just how diverse the offerings are in a city like Los Angeles … it offers a great opportunity to introduce people to Europe’s diverse cuisine in a playful, educational way.”

For instance, Ouendag noted Americans’ evolved taste and knowledge of wines, as well as the growing culinary trend of fresh and locally grown produce.

Consequently, some enhancements for 2010 that emerged following the trip, is that for 2010 Viking is introducing organic choices for breakfast and organic wines. It will also be increasing the number of cooking demonstrations on board. Depending on where guests sail, they can learn how to make Alsatian flammkuchen (a flat bread that looks somewhat like a pizza topped with ham and onions), French fondant au chocolat, or Austrian apple strudel.

And something Viking started in 2009 that it will increase in 2010 is chef visits to local markets with passengers in tow.

At this point, almost all new and refurbished river cruise ships have at least one, if not two, alternative dining areas to the main restaurant, including dining in the bar and lounge area, or increasingly in a smaller aft lounge that many new ships are having built in. There is also a new trend toward offering and marketing a more casual lunch grill on the outdoor sun deck when weather permits.

Avalon Waterways was one of the company’s to embrace the sky deck grill, available on four of it ships — the Avalon Scenery, Creativity, Affinity and Luminary — and will be available on the Avalon Felicity when it launches this month. At the grill, up to 40 diners can enjoy an open-air lunch.

Also, Avalon’s Royal Deck passengers can order a continental breakfast for their room (room service is not traditionally available on river cruises yet).

This past fall, Uniworld River Cruises too decided to put greater emphasis on its food and beverage program by hiring a new culinary director, Bernhard Zorn, who has worked on Crystal Cruises and Silverseas Cruises, and has been tasked with enhancing the on board culinary experience.

The move comes on the tail of Uniworld having introduced a new Epicurean Adventurer program last year, which is available on 11 of its Europe itineraries, and includes wine pairings with dinner and cooking demonstrations. And this year Uniworld also added a Travelling Lite program, food options for calorie-conscious guests. 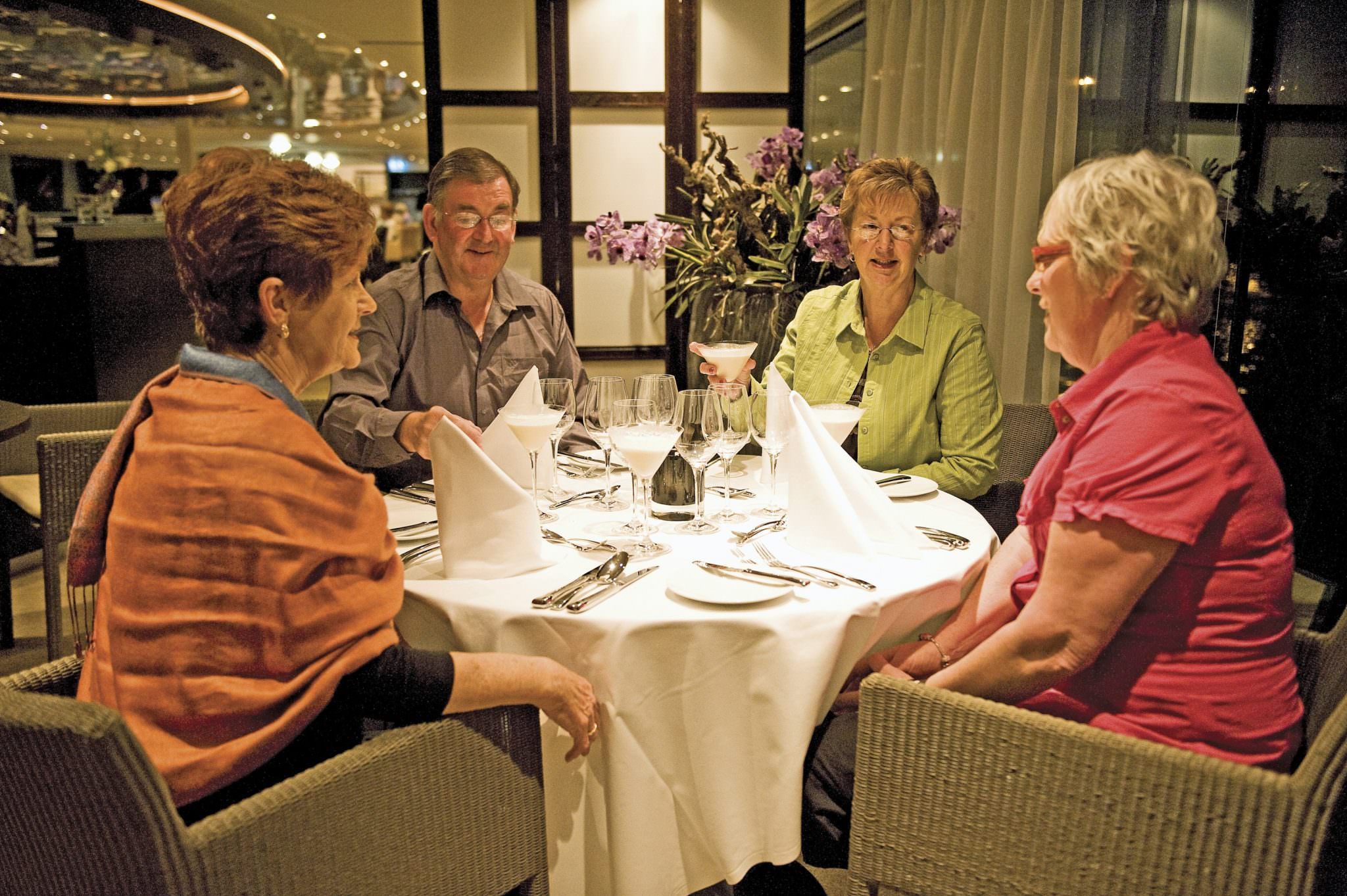 Yet another dining alternative is being introduced on at least two river cruise lines: an additional Italian-theme restaurant. Already, the Australian-based company Scenic Tours, which has four river cruise ships — the Scenic Emerald, Sapphire, Diamond and Ruby — has in addition to its main dining room (which has a capacity of between 182 and 184 passengers, depending on the ship), an alternative Italian-theme restaurant called Portobello’s (pictured), which can sit up to 28 passengers on a reservation basis.

AMAWATERWAYS, too, is planning on introducing an Italian-theme restaurant on its two newbuilds, the Amabella and Amaverde, slated for 2010 and 2011 delivery, respectively. Both ships will be devoted entirely to the Australian market, so AMAWATERWAYS isn’t marketing the developments too heavily in the U.S.

On the Amabella and Amaverda,AMAWATERWAYS’ President Rudi Schreiner said the restaurant will be divided into two sides — on one side will be a regular restaurant, and on the other an Italian-theme restaurant.

And the alternative dining restaurant at the aft of the ships “is going to be a special experience restaurant,” said Schreiner. “It’s something that people might do once or twice doing the cruise. It’s not like in the front, where you have a choice of three or four entrees. The chef will be cooking something different [every night].”