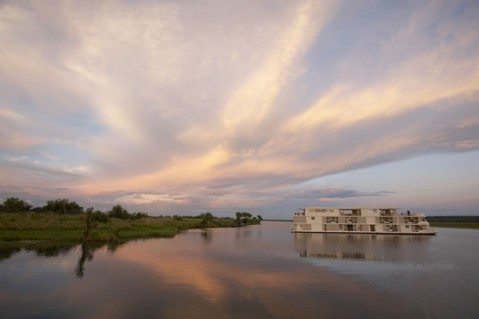 Recently, boutique luxury river cruise ships have been cropping up in exotic destinations such as the Mekong River and the Peruvian Amazon. The latest is the Zambezi Queen, a 28-passenger, all-suite ship that launched last month on the Chobe River in Botswana.

With 10 suites and four master suites, the Zambezi takes guests on three- and four-day floating safari cruises along the banks of the Chobe National Park, home to some 120,000 elephants, as well as birds, leopards, lions, buffalo, waterbuck and giraffe, with hippos and crocodiles swimming in the waters.

The Zambezi is owned by Brett McDonald and Tony Stern. Stern is the owner and founder of Blue Views, luxury villa rentals in Cape Town, South Africa. Stern explained that the Zambezi Queen is intended to be more of a floating hotel than a river cruise ship, with daily game watching excursions on skiffs or by land. 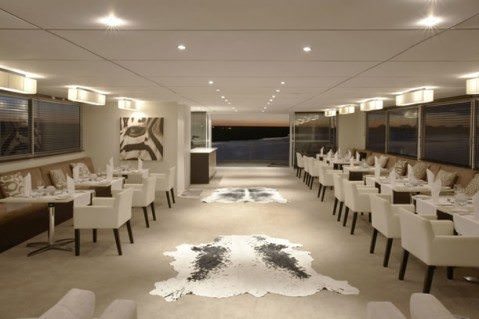 Zambezi Queen was designed with a modern African luxury feel

The ship was designed with a modern African luxury feel — sleek, simple lines accented by black-and-white photos of African animals or animal printed pillows and rugs.

In addition to its balconied suites, the Zambezi has a dining room, bar and lounge with a wood-burning fireplace. The outdoor top deck features a pool and two shaded areas. The ship also has a library, complete with wildlife literature, games and a DVD player with wildlife documentaries.

The ship incorporates several eco-friendly features. It uses a jet propulsion system to reduce damage to the riverbed. At night, it switches over to a low emulsion system for lighting, refrigerators and other electronic operations. Solar panels provide the energy for hot water, and wastewater is stored rather than discarded into the river.