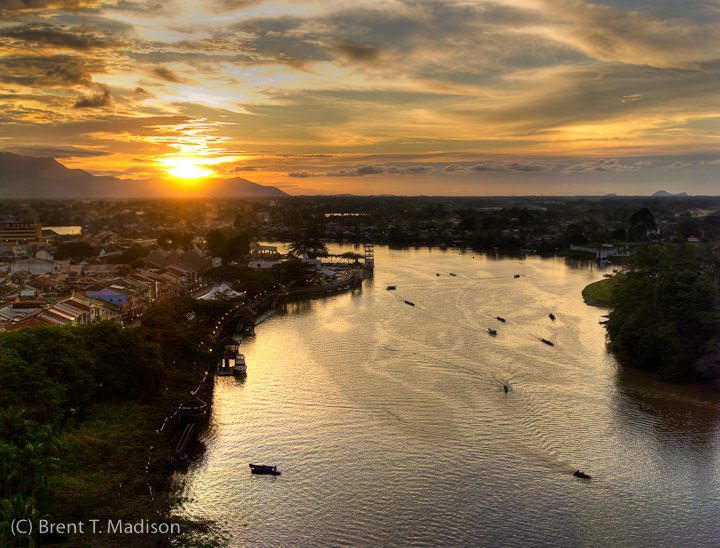 [On Pandaw Cruises: Up the River—With a Paddle Steamer was written by Colin Hinshelwood, CPA Media. Photos were provided courtesy of Brent T. Madison.]

With a couple of blasts on her whistle, the Orient Pandaw cast off from the port of Sibu and began her second voyage up the Rajang River, one of the world’s last uncharted frontiers.

Dozens of locals had gathered at the docks in open awe of what appeared to be a majestic paddle steamer. Waving from the top deck, I imagined that I might look like Rudyard Kipling in the jungles of colonial India or Joseph Conrad setting out to explore Africa.

It was as if we had abandoned the 21st century and were back in the heyday of the British Empire. I surveyed the vast rainforest ahead, contemplating the mystique of Asia through pale European eyes.

We were shown to our cabins—neat, cozy staterooms finished in teak and brass. I donned my most dapper attire and went up to the sundeck to join the 34 other passengers enjoying cocktails.

Bryce and Fae, a lovely Australian couple in their 60s, tell me they are on their fifth cruise with this company. This time they’ve brought their daughter and 5-year-old grandson. Then there’s Peter, an English gentleman who has been globetrotting as a travel writer since 1973. Most passengers are seasoned world travelers, but have great expectations for this trip “into the heart of Borneo.”

Any trip to Sarawak, on the northern coast of the island of Borneo, usually begins in the state capital, Kuching. If you think that Borneo is a wild and primitive land, then be prepared for a shock.

Kuching is modern, clean, lively and elegant. Think Singapore without the neon lights and high-rises. Almost all the half-million residents speak English. The city is characterized by its harmonious fusion of Malay administration, Chinese business savvy, tribal cultures and the charming vestiges of British colonial architecture. 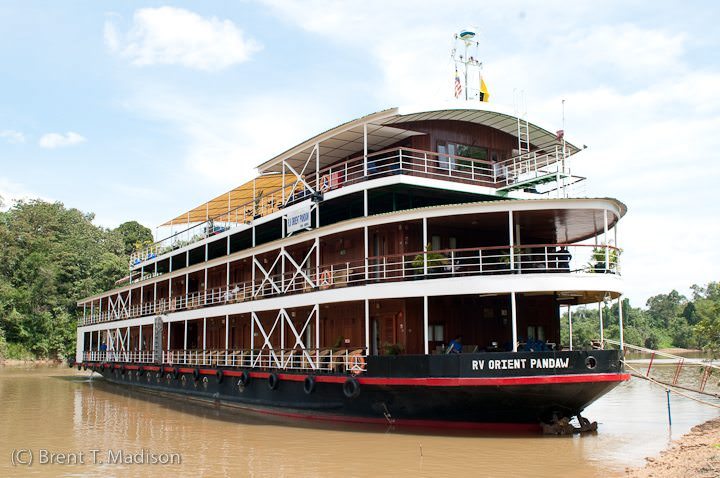 With only 1.5 meters of draft, the Orient Pandaw can navigate extremely shallow rivers like the Kanowit River (pictured), Sarawak, Borneo, Malaysia.

The port of departure for this cruise, Sibu, on the other hand, is the city that tourism forgot. Or it was until now. Sibu and its Rajang River district received just 2,000 foreign tourists in 2008. That number will almost double this year thanks to Pandaw Cruises, an innovative company whose story deserves a mention.

About 13 years ago, a Scottish historian, Paul Strachan, discovered an abandoned paddle steamer on the Irrawaddy River in Burma. The ship was called the Pandaw and had been built by the Irrawaddy Flotilla Company in Glasgow. Strachan’s grandfather had worked for the company and so Paul took it upon himself to restore the ship and set it up for tours in Burma. Since then, the reborn Irrawaddy Flotilla—now renamed Pandaw Cruises—has built six replicas of the colonial paddle steamers as luxury cruise ships (two of which Strachan donated to be used as mobile hospitals during the cyclone relief effort in Burma last year). It now operates cruises in Burma, Cambodia, Vietnam and Borneo. In September 2010, it will launch another venture—a 15-day trip along the Ganges in India.

Nowadays, the ships are powered by two 500 hp diesel engines rather than steam and paddles, but the romance of a bygone era is still evident. With a gentle hum, the Orient Pandaw does a steady 8 knots and leaves almost no wake. I spend the first day doing little more than watching the chocolate-colored river and the mangroves glide by.

No passenger ship has been seen on the 640-km Rajang since 1942, so it is no surprise that we are such an attraction. Astonished Malay, Chinese, Iban, Melanau, Kenyah and other indigenous faces stare at us when we tie up at local villages; or they suddenly produce mobile phones and start taking photos of us, which shakes me back soberly to the present era.

I am settled in a deckchair reading, sipping tea and breathing in the virgin rainforest air. A brass gong routinely interrupts my reverie, announcing breakfast, lunch or dinner, which are meticulously presented dishes of local and Asian fusion cuisine. Soft drinks and beer are complimentary while wines are reasonably priced at between US $30 – $50 a bottle. On the third day, I go for an oil massage. So far, it’s all going to plan.

The only other breaks in my lazy routine are the daily stops at villages on the river where we sample palm or sago wine and visit rubber plantations, schools and markets.

At sunset, we gather on deck to mingle, comparing previous adventures and drinking cocktails. Most of my fellow passengers tell me they are here for the adventure, not for relaxation. We visit a village every morning and most afternoons, but I am often the sole passenger left lounging on the sundeck while everyone else goes exploring.

But I’m not always so lethargic. As soon as I hear the engines start up before dawn I spring out of bed and get up on deck. The boat seems to float on a morning mist. The distant silhouettes of mountains stand out against an indigo sky.

Armed with my Birds of Borneo reference book and a fresh morning mug of coffee, I pull a deckchair up to the rail and start scanning the hazy riverbanks for signs of life.

Borneo should be a naturalist’s dream: It is the native habitat of crocodiles, rhinoceroses, clouded leopards and orangutans, and is also home to snakes, monitor lizards, civets, monkeys, gibbons and an impressive diversity of bird species, including hornbills, kingfishers and eagles.

I wait patiently for the swish of a crocodile’s tail as it scrambles into the mangroves or for the screech of an eagle spotting its prey. But nothing.

“They’ve all moved into the jungle,” says our guide Andreas with an apologetic smile. “Too many hunters: too many timber companies.”

Disappointed, I ready myself for my second mission on this trip: to find a headhunter.

In Search of Headhunters 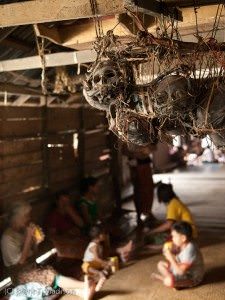 On Day 4, some 150 miles upriver, we arrive at the town of Kapit. We are driven in minivans to an Iban village and visit a “longhouse,” which is the traditional tribal dwelling in Borneo. Each longhouse is about 120 feet in length and has separate rooms linked by a wooden balcony which acts as communal area. Andreas tells me there could be up to 300 members of an extended family living in this one longhouse. I notice that there are lots of mothers, children and old people, but not so many working-age men around. They must have headed for the Big Smoke.

On the ceiling, I find evidence of the tribal headhunters – a hanging basket of human skulls. I am told that they are more than 60 years old.

There’s an old man sitting in the corner with black tribal tattoos on his neck, torso and legs. With Andreas as translator, I go over and sit down beside him for a chat. But I notice that he doesn’t have any tattoos on his knuckles—a tradition reserved only for men who have taken heads.

“There might only be one or two ex-headhunters still alive in Borneo,” Andreas translates, “but none in this town.” Maybe it’s just as well…

As we were the first tour group the town had seen in years, the curator opened the Fort Sylvia museum for us, even though it was his day off. The fort was built by the second of Sarawak’s colonial “White Rajahs,” James Brooke, as a frontier post to prevent Iban warriors attacking weaker tribes upriver.

Kapit also marks the point where the Rajang narrows and the ship turns around to head downriver. However, the captain, ex-QE II Chief Officer Sean Whalley, was able to steer us up a jungle tributary for half a day of spontaneous exploration.

“Now these really are uncharted waters,” muttered Captain Sean to me, and I joined him at the bow on the lookout for sandbanks and debris.

We pass Sibu again and head for the mouth of the river. The unmistakable scent of the sea tells me it is not far. The Rajang widens to around 1 kilometer and the mangroves are replaced by palm and sago trees. There is a tidal line across the river where the Rajang meets the South China Sea. The water turns cloudy jade and, on the horizon, I can make out the turquoise fringe of the ocean. We have reached the end of the line. The Rajang has been conquered and it’s time to head back to port.

Unsurprisingly, that night we have seafood for dinner. Appetizers include raw fish cerviche and dill salmon. I am famished, so I opt for the “surf n’ turf”—beef sirloin with grilled lobster. Delicious! Peter is celebrating his anniversary tonight and kindly orders a couple of bottles of South African Shiraz for our table.

On the final night we all exchange cards and emails, and I am touched by the genuine feelings of warmth. Some are even hatching plans to meet on the Ganges trip later this year.

“I just loved being in Borneo,” said Ken, an investment manager from Los Angeles. “So unexplored, so much potential for adventure.”

“Into the Heart of Borneo”: Eight nights on the RV Orient Pandaw. Prices start from US $2,250 per person. Pandaw Cruises

Where to Stay in Kuching:

Where to Eat in Kuching: