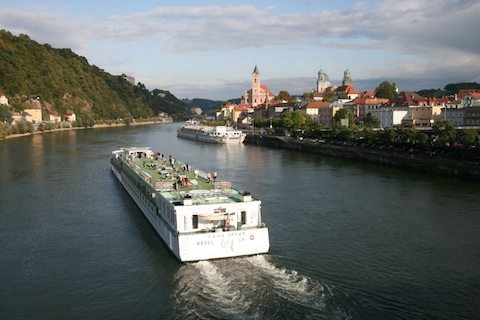 The river cruising model of touring Europe on an overnight passenger vessel dates back to the late ’70s and early ’80s, when pioneers like Uniworld, KD River Cruises and Peter Deilmann Cruises first explored the idea.

Since then, KD River Cruises was acquired in 2000 by Viking River Cruises, and this June, Peter Deilmann Cruises announced that its 2009 river cruise season would be the company’s last.

Deilmann was one of the grandfather’s of river cruising. So, what has changed? Well, quite a bit during the last few decades.

But, he added, “There’s no real plausible reason that I can understand [for Deilmann exiting the river cruise business]. And I say that because if you look at the market, river cruising as a travel style has held up remarkably well.”

Torstein Hagen, chairman of Viking River Cruises, said the problems at Deilmann were specific to that line and have no bearing on what many say continues to be a thriving river cruise market in Europe.

Deilmann had the additional challenge of catering to several different markets.

“They had this dichotomy of being English- and German-speaking, which is very complicated,” Hagen said.

In addition to language challenges, there are also cultural differences between the North American and European markets. For instance, Germans prefer leisurely cruising with long, high-quality meals because they are familiar with the towns along the way, said Rudi Schreiner, president of AMAWATERWAYS. Americans prefer longer stops in towns and shorter meals, he added.

“Peter Deilmann had a different philosophy of river cruising then what I had planned during my times at Uniworld, at Viking and now at AMAWATERWAYS,” said Schreiner. “Peter Deilmann focused primarily on serving the German passengers whereas I always focused on the North American market.”

Meanwhile, the fate of Deilmann’s eight river cruise ships remains in question. The company’s flagship river cruise vessel is the 200-passenger Mozart, built in 1987 and refurbished in 2007.

Even though the Mozart stirs much nostalgic sentiment from former passengers, it’s also an older vessel in an increasingly youthful market. That’s not to say that one or some of the Deilmann ships won’t sail again.

Uniworld, for one, said it is making inquiries as to the status of the Deilmann ships.