River barging is the quainter, more relaxed version of river cruising — imagine just yourself and a small group of friends or your family coasting along rivers and canals from village to village on an 8-passenger vessel.

That’s what European Waterways is proposing: a 1,000-mile, 6-week, culinary and cultural adventure aboard its 8-passenger barge, Anjodi, from Provence to Amsterdam, a trip not unlike the one taken by accomplished chef Rick Stein. Stein filmed aboard the barge for his BBC TV series “Rick Stein’s French Odyssey,” a 400-mile culinary tour of Southwestern France. 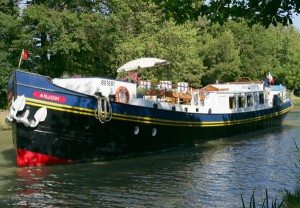 The Anjodi cruise is along the Rhone, Seine and Rhine rivers, as well as along smaller waterways such as the Canal de Bourgogne. It is a mixture of sightseeing and city stays combined with an exploration of regional cultures, cuisine and wines of Provence, Beaujolais, Burgundy, Champagne, Alsace and the Moselle and Rhine valleys.

Anjodi is a classic Dutch-design hotel barge of classic Dutch design. The barge incorporates Africa hardwoods, hand-crafted paneling and brass, for a classic yacht feel. There are four air-conditioned twin/double staterooms onboard, each with full bathrooms. The barge also features a shaded sun deck with a heated sunken jacuzzi and teak deck furniture.

As with all European Waterways’ cruises, all meals will be prepared by the onboard chef, complimented by regional wines and an open bar. The majority of meals are taken aboard, but at least once a week passengers dine ashore.

This cruise is $25,000 per person, based on a minimum of 6 passengers, or as a whole barge charter for $185,000. Rates include all meals, wine, open bar, excursions, admittance fees and transfers.