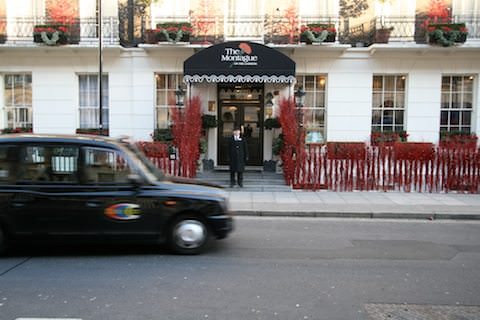 Uniworld has a unique resource in the river cruising world in that parent company TravCorp also owns the Red Carnation Hotel Collection, a collection of 13 luxury boutique hotels (including six in London, such as The Montague in the photo above), the designers from which were employed to make the ship’s interior look less like that of a ship and more like that of, well, a boutique hotel.

“It’s been our philosophy that we want to position Uniworld at the top end of the market. We want to be a luxury boutique hotel group on the waters,” says Guy Young, president of the Los Angeles-based Uniworld. “Certainly, what we’ve done with the Beatrice is set the standard for the company going forward.”

Consequently, Young said that Uniworld “spent a lot more on the ship,” than on any previous Uniworld ship, most of which went to interior design details and extras like the made-to-order Savoir Beds (an English bed company established in 1905).

And while the Red Carnation team has weighed in on the interiors of previous Uniworld ships, Young says that the company really “kicked it up a notch” with the Beatrice.

For instance, the ship is filled with all original artwork that was scouted at auctions and antique stores — the owner’s suite features art by the 20th-century English Impressionist Paul Maze.

Staterooms have Egyptian cotton bedding and towels from Christie’s of Manchester. With 15 suites and 65 staterooms, the vessel has far more suites than any other Uniworld ship before it. The most suites on any Uniworld ship until now had been four.

The 160-passenger Beatrice is Uniworld’s 10th ship in Europe, and at 410 feet it is the river cruise operator’s longest ship to date.

According to Uniworld, 80% of the staterooms have French balconies. The only ones that don’t are the 13 staterooms on the lower Moselle deck.

The River Beatrice also features a lounge, restaurant, library, sundeck, massage services, fitness center, sauna, Jacuzzi, gift shop and elevator. There is wireless Internet access on the ship and complimentary use of bicycles, a new feature for Uniworld.

“While the destination plays a much more important role in river cruising than in ocean cruising,” Young says, “I see no reason why [passengers] can’t have a superb experience on board while having a fantastic land experience.”

Uniworld’s next ship will be the 84-passeenger, all-suite River Tosca, which sets sail on the Nile River in Egypt this fall. According to Young, passengers can expect the same level of interior styling and detail as on the Beatrice, on the Tosca as well.

“It’s really trying to elevate ourselves,” Young says. “Luxury boutique has a real appeal with consumers.”