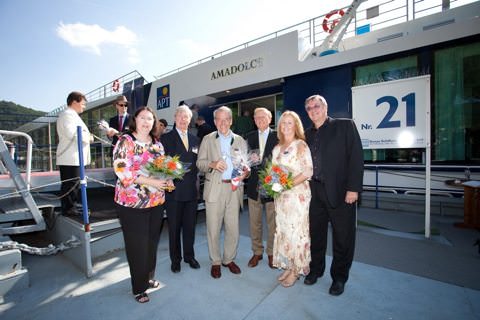 AMAWATERWAYS christened the Amadolce, a new river cruise ship that will predominantly service the Australian market this year, in Durnstein, Austria on May 20.

Australia Pacific Touring (APT) has chartered the vessel for the Australian market for most of 2009.

With the launch of the Amadolce, AMA has reached its goal of building six new ships over the last three years. The 148-passenger Amadolce was christened six weeks after its sister vessel the Amalyra.

Like all AMA ships, the Amadolce offers complimentary Wi-Fi; 170-square foot cabins (82% of which have French balconies); down duvets; flat-screen TVs; and marble-appointed bathrooms, among other amenities. Wine is free with meals, served in the ship’s restaurant.