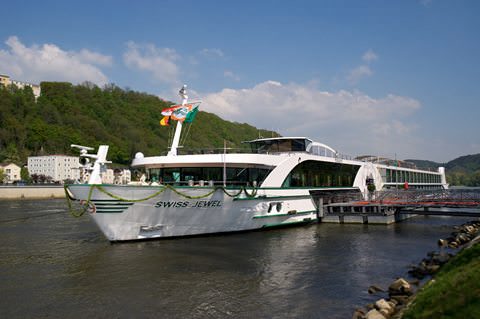 The Rhode Island-based tour operator now has three vessels that sail under the Tauck name — the Swiss Jewel, Swiss Sapphire (launched in April 2008) and Swiss Emerald (launched in 2006).

The elegant 361-foot Swiss Jewel, like its sister ships, has 59 staterooms, including 14 suites at 300 square feet each, and seven junior suites. The staterooms and junior suites range from 150 to 183 square feet.

In addition to the main restaurant dining area, the Swiss Jewel has a more casual alternative, the Lido Bar, at the aft of the ship. The ship also features a 24-hour Jacuzzi, lounge and wellness center.

The ship has a crew of 29 as well as three Tauck directors and one Tauck cruise director.

The Swiss Jewel will sail five itineraries this year: Blue Danube, Budapest to Amsterdam, Budapest to the Black Sea, Black Sea to Prague and the 24-day Grand European Cruise.