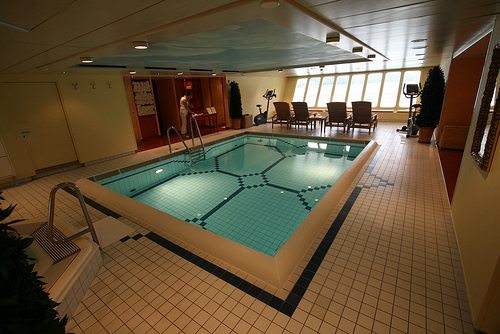 Perhaps the biggest surprise for passengers on Peter Deilmann Cruises’ Mozart is that they will get to put their swimsuits to good use. Indeed, many of the passengers I spoke with on a September sailing along the Danube were astonished to learn that the five-star river cruiser offered a warm and welcoming watery respite, situated indoors on deck two at the front of the ship.

The fact that Mozart features an indoor pool (the only such ship in Europe to do so) may not necessarily be a key factor in choosing this ship over its competitors on the Danube, but the fact that Mozart is wide enough to accommodate a pool is worthy of consideration. Mozart’s extra width allows for larger staterooms and the addition of super-sized public spaces, including an expansive panoramic lounge, a large library, a sprawling top sun deck and a spacious Wellness Spa. 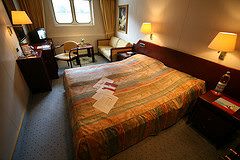 The 206-passenger ship is nearly twice as wide as other river vessels. Its cabins are among the largest to be found on a river vessel. Standards (pictured) measure 203 square feet; Mozart’s two suites measure 406 square feet each. 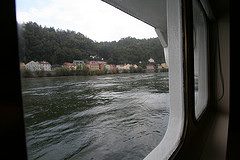 Some cabins are configured as twins, others with a queen-size bed. All are beautifully appointed and feature built-in wardrobe space, color TV, mini bar, dressing table, sofa, coffee table, shower and toilet, telephone, audio entertainment center and large picture windows, some, such as those on deck two, positioned slightly above the water level.

Bathrooms are large and equipped with a built-in hairdryer (which gets the job done but is not particularly powerful) and terry robes.

Bedding features a European-style duvet with feather pillows and eiderdowns (synthetic materials available upon request). With two double hanging closets and several drawers plus a cabinet of shelves, passengers will find ample room for their wardrobes. 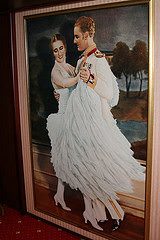 Classic and Continental
Though it is not the newest ship in Peter Dielmann Cruises’ fleet, the Mozart, which entered service in 1987, continues to undergo annual refurbishments and updates that bring it up to current standards while also freshening the classic look of the interiors. The décor throughout the ship is in gold and rose with rosewood paneling. Original art gives an air of understated elegance rather than glitz.

The Don Giovanni Deck is the heart of the ship’s public activities. At one end is the formal dining room, its picture windows providing a constant backdrop and its tables beautifully set with linens and flowers. A boutique, offering gifts, clothing and sundries, operates in the center hall.

The paneled library, with books, newspapers (including USA Today and the International Herald Tribune) and magazines in multiple languages, invites passengers to linger in leather club chairs. 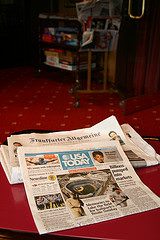 Internet access, at 2 euros for 15 minutes, is available when the ship is in port. There is no wireless internet or provisions for passengers to use their own laptops, although internet cafes are within walking distance of many ports along the Danube.

Depending on what the satellite can pick up, stateroom televisions feature at least one English-speaking channel, CNN during most of my cruise.

The long rosewood Don Giovanni Bar at the end of the cafe leads into the lounge where afternoon tea, the captain’s receptions, evening entertainment and dancing take place. No smoking is allowed in the cabins or public spaces, although guests can light up on the outer decks.

The upstairs sun deck is a delightful place to be when the weather is agreeable. Wind breakers and a stack of warm blankets help when it is not.

Personal and Plentiful
Every bit as important as the ship’s amenities is the on-board atmosphere that the Dielmann staff cultivates, welcoming guests by name and personalizing service wherever possible. With one crew member for every 2.5 guests, the ship specializes in attentive service. 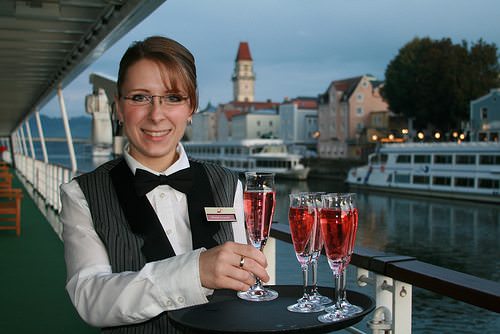 “We try to get to know the names of our guests,” says Vanessa Kohler, the ship’s hotel manager. “To be able to give such a personal level of service is the reason we’re all here. Otherwise we could work on a 2,000 passenger cruise ship.”

The European crew is multi-lingual, and announcements, shore excursions, menus, maps and destination guides are all offered in German and English. The presence of European passengers (typically about half of the passengers are North Americans) lends a Continental air to the ship. “Most of our American passengers are pleased to get to know the different cultures on board,” Kohler, the hotel manager, says. 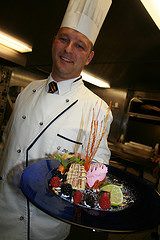 Deilmann prides itself on lavish menus. Cuisine is international and may feature some foods foreign to American palates. Executive Chef Oliver Pilarczyk (pictured) and his team prepare menus that frequently mirror local and regional specialties along the Danube, where Mozart operates each spring through fall.

Almost daily, Pilarczyk makes trips to the local markets to pick up fresh fish, meat, vegetables and fruit. “It’s important for us to get the best quality European foods,” he says.

Mozart offers no alternative dining venues, meaning that you either dine in the main dining room or ashore at your own expense (room service is offered but seldom used).

Tables are assigned upon embarkation, depending on the passenger’s primary language (my cruise featured tables for German-speaking, Italian-speaking and English-speaking guests.) For those who prefer privacy, there are a few tables for two.

Mozart features only one seating, except in Vienna where there are two, including an earlier seating for those who want to spend the evening in Vienna. On one morning of each cruise, Bavarian Morning Pint is offered. It falls between breakfast and lunch. On the menu, free beer, brats, sauerkraut, German potato salad, pretzels, music and more. 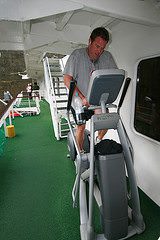 For those who want to indulge without guilt, the promenade is always available for brisk walks or jogging – six times around equals one mile. There are two cross trainers at back of ship; water aerobics are scheduled each morning; massages are available by appointment.

For relaxing, there is a sauna, and lounge chairs are beyond the pool, facing a panoramic window wall. A physician is always onboard and there is an infirmary. Mozart also offers special dialysis cruises during the year.

The dress is consistently casual, although formal evenings will require a suit or a dress. There is no self-service laundry, by the way, but laundry service is offered.

Entertaining and Enriching
For entertainment, a pianist keeps the mood lively during afternoon tea, and a trio plays each evening and during cocktail hour. When the ship visits culture capitals such as Vienna and Budapest, many passengers partake of the opera or the ballet, to name just a couple of the options.

For Americans traveling on the Mozart, it’s an advantage to buy excursions prior to departure, in dollars, rather than on the ship, for the same number of euros. 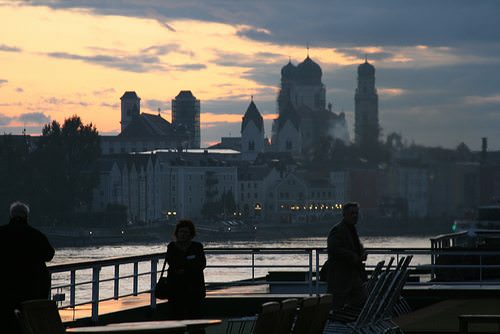 Mozart’s typical seven-night pattern is to cruise roundtrip from Passau, a lovely Bavarian village that should not be missed. Be sure to take a walk shortly after embarkation, but note that most shops will be closed on the Sunday that you arrive in — and depart from — Passau. Step inside St. Stephan’s Cathedral to see the world’s largest cathedral organ.

Monday, on my cruise, Mozart called on Durnstein (explore the village on your own), and Vienna, where I joined an enjoyable cycling tour of the city.

Mozart overnights in Vienna, which allows guests to see concerts or enjoy the Viennese nightlife, then proceeds overnight to Esztergom, the former Hungarian capital, before continuing on to Budapest, where Mozart once again overnights.

The next morning, Mozart calls on Bratislava, departing mid-afternoon to arrive late evening in Vienna for a 90-minute stop before proceeding overnight to Melk, home to the spectacular Benedictine Abbey.

Later the same day, Mozart calls on the tiny village of Grein, then makes its way overnight back to Passau. 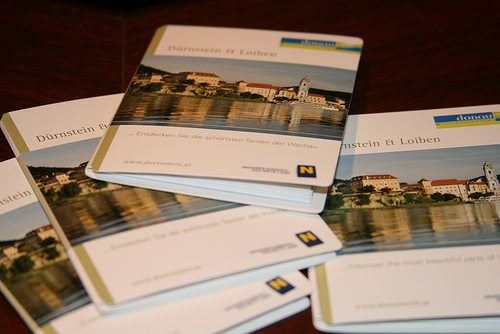 Excursion options include city tours in most ports, but passengers who want to go off on their own can get city maps and advice from the ship. “There are so many things you can do on your own in the city,” says Ramona Kurcsics, excursions manager. “We explain how easy it is to get around, with the underground in Vienna (only a five-minute walk from where the ship docks), for instance.”

Skip the advance purchase wine package. I paid six euros (about US$8) for a half carafe (two glasses) of an exceptional Gruner Veltliner, produced in the Wachau Valley where we were cruising. The owner of the vineyard had delivered a few cases of the wine earlier in the day.

For the languid yet luxurious pace of river cruises, it’s difficult to imagine a ship that would be a better choice for cruising past the Danube’s storied villages and cultured capitals. 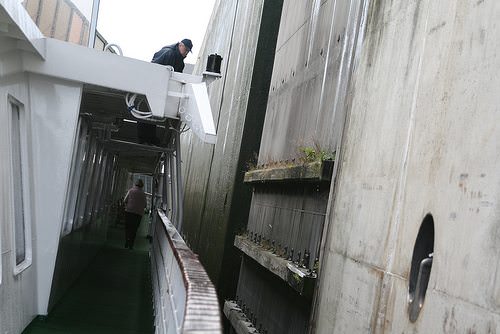 Factoid
Mozart was built in Deggendorf, Germany, but the vessel was too large to transit the locks of the Main-Danube Canal. So in order to reach the Danube River, the ship had to chart a course to the North Sea and around Europe through the Mediterranean to the Black Sea and up the Danube, where it is permanently operating.

Click on any of the photos in this post to view with extended captions on view as a slideshow by clicking Peter Deilmann’s Mozart.