You are here: Home / Lifestyle / Bicycling / The Dutch Way 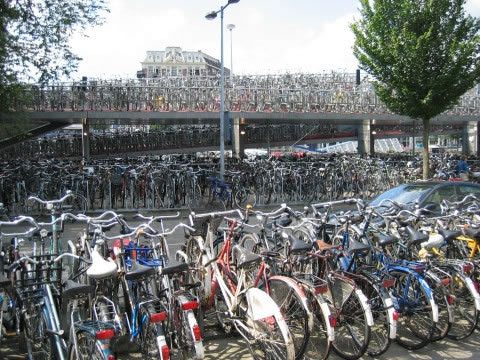 In the Netherlands, it is said, there are more bicycles than people.

The statistics, thanks to the web site Amsterdamize:

I pedaled through the tiny country and saw more bikes than I could count. Everyone, from crib to coffin, pedals a bike in Holland.

The country is mostly flat and ideal for cycling, but the best part is that cyclists pedal along roads either with no cars at all (with traffic lights just for bikes) — or with drivers who actually pay attention to cyclists. That is why Dutch cyclists are 30 times less likely to be killed than their stateside counterparts, according to Bicycling magazine.

The story gets even better when you combine boats and bikes. That is just what I did for one week on a “Bike & Boat Tour” offered by Channel Cruises, which touts its tours as “the most Dutch way” to see Holland.

Each morning, the captain mapped out a route for the 70 or so German, Dutch and English-speaking passengers. We pedaled away from the ship in small groups to a destination where we would meet the ship late that afternoon. Along the way we fortified ourselves with apfelcake (apple cake) and french fries with the traditional Dutch topping — mayonnaise. There is no better way to see Holland.

I was not lucky enough to travel during mid-April to mid-May when tulips turn the winter fields to color, but the weather during my trek in June was sunny skies all week.

Our ship, Anna Maria Agnes, was not as luxurious as the Viking River Cruises vessel we were docked beside in Amsterdam, but it was certainly adequate, particularly for launching cycling trips and having someplace to come home to. Cabins featured two beds with a private bath (there are configurations for three and four). Pack lightly.

No need to bring a bike. They’re available — and in prime condition — on the boat. They’re easy to pedal too. Our group ranged in age from 13 to 82 and averaged 35 miles a day. And the evening meals were especially good, particularly after long days on bikes seeing Holland “the Dutch way.”