You are here: Home / Cruise Companies / Uniworld River Cruises / When Rudy Does Nothing, You Can Count On A Great Cruise

Of all the jobs in the world, surely Rudolph van der Meulen’s must be among the best. His job, as instructed by his bosses, is to cruise on a river boat and simply to do this: nothing.

While most people might call that a vacation, it’s a tall order for the otherwise-ambitious 37-year-old hotel manager on Uniworld’s River Empress. Nonetheless, on the day when I talked with him, Rudy was living up to his superior’s expectations with admirable aplomb.

Taking in Passau’s pretty waterfront from the sunny upper deck of River Empress, Rudy could have been just another passenger aboard the river boat — were it not for his uniform. But had you been a passenger during the eight-day cruise along the Danube, as I was, you would have known that Rudy’s job was far from doing nothing. 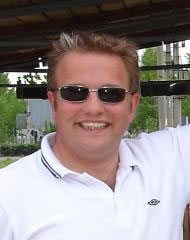 Rudy’s responsibility was (and still is) to manage a grand floating hotel and to keep the more than 100 passengers happy. His bosses demand that he do so by managing effectively and by delegating, freeing himself up to listen to — and respond to — guests.

Corporate headquarters’ gift to Rudy: “The One Minute Manager,” suggested reading for managers in Uniworld’s fleet.

Rudy’s style reflects a management philosophy that has trickled down from the upper echelons of Uniworld’s corporate headquarters in California. It’s a style that puts trust in employees, and it’s one that goes a long way in explaining why passengers on River Empress consistently give such high marks to the staff.

At the end of our cruise from Budapest, Hungary, to Passau, Germany, 45-year-old Laura from Greensboro, North Carolina, was so impressed with the the staff’s hospitality that she took the time to write personal notes to several crew members commending them for their service.

Quite simply, employees are free to act in the guest’s best interest, and the vessel’s management need not leap through hurdles to execute new ideas that in some companies requires navigating through layers and layers of bureaucracy.

Such positive reinforcement establishes an enthusiastic culture on-board the ship. After all, happy ship, happy crew.

Something done right on my cruise: An Australian couple showed up a day early for their sailing. The husband was panicked, the wife perplexed.

Rudy showed considerable grace by politely pointing out that the documentation the passenger was holding clearly stated that boarding was the next day, not today.

The bedraggled couple stood there at the reception desk with luggage in tow, the husband unable to take the blame for the embarrassing episode that threatened to leave the two of them sleeping in the streets of Passau.

Under no obligation to do so, Rudy invited the Australian couple to board one night early, much to their relief. The hotel manager of River Empress rose to the occasion admirably, but when the episode was over, he was glad to get back to doing what he does best. Yep, that’s right: nothing.