You are here: Home / Destinations / Europe / Austria / Pedaling Along The Danube 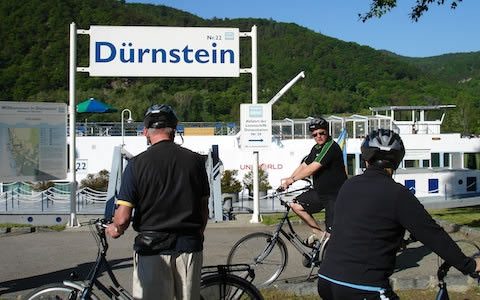 My river cruise has turned into a cycling tour. Each day during this journey up the Danube on Uniworld’s River Empress, I have had the opportunity to straddle a saddle and pedal along the river — or out into the picturesque countryside — with the River Empress serving as my comfortable floating hotel.

I can’t say that I expected to be cycling so much on what could be considered a “relaxed” river cruise. In fact, river cruises are often perceived as being “too relaxed”for some, particularly younger people and those who want to be active. But lately river cruise companies have been going to great strides to cater to those who want an active vacation. River Empress, for example, carries six sturdy Dutch bicycles, which are available for guests to use free of charge.

“I knew I would be one of the younger passengers on board,”says 45-year-old Laura, traveling with her mother and a friend from Greensboro, North Carolina. But she adds that she’s been pleasantly surprised by the options to be active ashore. “You may have to look for it,”she says, “but the options are there.” 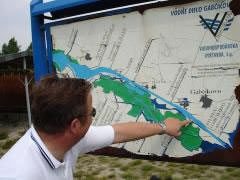 I didn’t have to look far. In Bratislava, I joined the hotel manager (pictured) and the executive chef for a three-hour ride on flat, paved, dedicated bike trails. One of the great things about cycling in Europe is that traffic and bicycles often use separate roads.

The next day, our ship docked in Vienna. The Danube flows on the outskirts of Austria’s capital city, and it’s a bit ambitious to think of walking “to town.”I’m sure it would have taken an hour to reach the heart of the city on foot. And while Uniworld includes a complimentary city tour in Vienna, I had done the bus tour before, and so I hopped on a bike instead. I’m glad I did. I had an exhilarating ride. 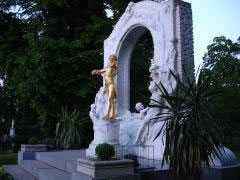 Shortly after pedaling away from the River Empress, I asked a fellow cyclist (a Viennese bike commuter) if he could steer me in the general direction of the city center. “Follow me,”he instructed. And follow I did. We weaved in and out of traffic, hopped sidewalks and dodged pedestrians. “Hope you don’t mind running red lights,”he shouted over his shoulder. I was in no position to argue.

Passing Stadt Park, he pointed to the statue of Johann Strauss (pictured left), which I later came back to see. We continued along Ringstrasse, Vienna’s best-known street, and from it, my escort pointed me to the Sacher Hotel, where we parted ways with a wave. I peeked in the hotel, walked along the pedestrian street, then headed back to the ship — exhilarated and euphoric. 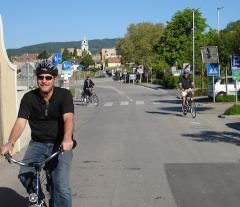 The next morning, shortly after we docked in Durnstein, my stateroom phone rang. “Did I wake you?”the voice on the other end said. “No,”I replied. It was Rudy, the hotel manager who I had cycled with two days before. “Five of us are cycling through the Wachau Valley,”he said, “and we have one more bike available. Want to join?”Of course I did. “We’re leaving in five minutes,”he added. I hustled to gather my things and headed out to join the others.

It was, suffice to say, one of those mornings when everything seemed right with the world. The sunlight was so golden that it appeared to have texture, like a golden cheese. I could have cut a slice and put it in my pocket. The six of us cycled past vineyards where workers waved to us. We pedaled through small villages, where the locals greeted us with a pleasant, “Morgen.”The world was a happy place, especially from the seat of a bike. 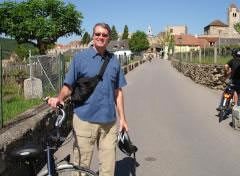 We pedaled for nearly two hours, returning to the fairy-tale-like Durnstein, where we had a glass of wine — a perfect ending to pedaling through Austria’s wine country. Who would have imagined that we were on a cruise?