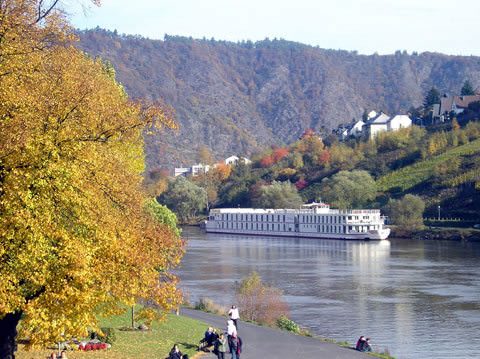 Rudesheim, Germany (October 14, 2006) : We are walking along Drosselgasse, the lively narrow pedestrian street in the best known wine village along the Rhine River. Saturday night, and the street is festive, with people dancing to oompah bands in beer gardens and wine cellars on either side. At one open-air beer garden, waitresses carry glasses of beer with froth sloshing. At a wine cellar nearby, patrons sip the Rheingau’s famous Rieslings, sparkling Sekts or locally distributed brandies.

There is no need to rush. Our riverboat, Peter Deilmann River Cruises’ Heidelberg, will remain docked here overnight. During our seven-day cruise along the Rhine and Moselle rivers from Mainz to Trier, the ship overnights in each port, docking within walking distance of the town centers. That proximity allowed us to walk back into the towns after dinner. It was as if we were staying in an elegant hotel in town.

In fact, the newest of Deilmann’s nine-vessel fleet, the 110-passenger Heidelberg resembles — and functions like — a deluxe boutique hotel. Each time we disembarked the ship, we left the brass key to our stateroom at the front desk, much the same as you would do at a hotel. Standard staterooms were large, 190 square feet, with rich colors — golden hued walls, carpet and drapes, light-wood tones and crown moulding.

The queen-sized bed featured European style duvets with feather pillows. The bath was spacious, with floor-to-ceiling tile and brass fixtures, a pedestal sink and showers so large that you don’t have to step out of the shower if you drop the soap as you do on large ocean liners.

Heidelberg features French balconies. You can’t step out on them, because there is nothing to step onto. With double glass doors that slide or swing open, French balconies offer the same functionality as a balcony on a large ship, providing open-air views of the passing countryside.

Sprechen Sie Deutsch? If you don’t speak German, you’ll find the ship a safe haven. Though many Germans do speak English, and some with fluency, there is a language barrier, and it can slow you down when touring the towns and cities on your own. On the ship, the staff speaks English well, and they can direct you to whatever you need ashore — whether it’s a museum, restaurant or internet cafe.

There is a downside to the ship’s bilingual nature. What might have been a great presentation on Moselle wines turned out to be laborious, because the speaker had to present in two languages (ship announcements too are given in two languages). And there were times when fellow passengers (the mix was about 60 percent European, 40 percent American) simply could not communicate. That did not stop a group of Germans from inviting us to song and drink one night.

There are, of course, things that may irk some travelers: Smoking is permitted in Heidelberg‘s lounge; river cruisers typically offer no alternative dining venues, meaning that you either dine in the main dining room or ashore at your own expense (room service is offered only during breakfast); there are only a few tables for two; and for those who must remain connected, no internet access.

Are you a fan of duck liver pate? If so, you’ll love the cuisine, and you may also want to try the herring. I joked with a fellow passenger that if they labeled it “Sushi,” Americans would be clambering over one another to fill their plates.

Okay, aside from a few dishes that I was not accustomed to, the food on Heidelberg was outstanding. Breakfast was European-style, a smorgasbord that even offered champagne, or Sekt, as the German sparkling wine is known. And on one morning of each cruise, Bavarian Morning Pint is offered. It falls between breakfast and lunch. On the menu, free beer, brats, sauerkraut, German potato salad, pretzels, music and more.

For those seeking an upscale European river cruise experience, Heidelberg gets high marks as a floating deluxe boutique hotel cruising on what may just be the most beautiful rivers in Europe.