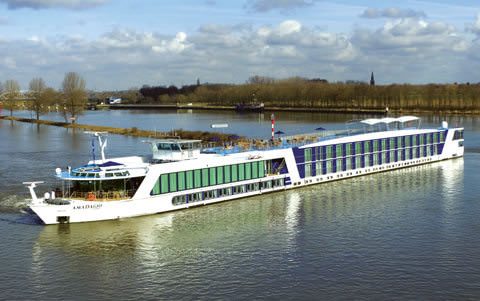 En Route To Prague, The Czech Republic (December 31, 2006) : Recapping events of our seven-day cruise from Budapest to Nuremberg, Cordula Deeken, hotel manager on AMAWATERWAYS Amadagio, proudly proclaimed that we were close to breaking an all-time record: 279 bottles of wine consumed, only 23 bottles shy of a record set last summer. The audience applauded during the cocktail reception on the final night of our cruise. We were sure to surpass the standing record, because dinner and a New Years Eve “practice” party still were ahead of us, and on Amadagio corks go popping with great frequency thanks to the ships policy of “wine and beer included: with dinner.

Our cruise started in Budapest on Christmas Eve, sailed along the Danube River to the visit the Austrian cities of Vienna, Melk, Ybbs, Linz, called on Germanys Passau and Regensburg, transited the manmade Main-Danube Canal and crossed the Continental Divide (a feat that required locks to lift our ship approximately 1,400 feet above sea level) before ending in Nuremberg.

In each port of call, AMAWATERWAYS included well-organized city tours as well as nominally priced optional tours. At least one tour in each port is included, because the company strives to be as all-inclusive as possible. Also free of charge: the use of bicycles carried on board, bottled water in staterooms, “infotainment” systems in every stateroom equipped with a monitor and keyboard for internet access (wireless internet is available in the Verandah Lounge), TV, movies (approximately $5 per rental, with at least one feature movie free of charge each day), music playlists and a satellite phone with rates of about $1.25 per minute to call home.

Built in 2006, the 150-passenger Amadagio is AMAWATERWAYS newest vessel. A sister ship, Amalegro, will be delivered in the spring. Standard staterooms measure 170 square feet, and all but a few feature French balconies, with floor-to-ceiling glass spanning the entire exterior wall. Beds rival those of the finest hotels, with plush European-style down pillows and down duvets. Also in staterooms: terrycloth bathrobes. The ships also feature four Junior Suites, measuring 255 square feet, with bathrooms that feature a bathtub and shower.

Catering primarily to North Americans and Australians, Amadagio has a nonsmoking policy, except on the exterior Sun Deck; presentations and announcements are in English only. The ships open-seating dining arrangement has many tables for two. Though meals are tailored toward Americans, regional specialties (and regional wines) also are served.

With four interior public decks, Amadagio also features an elevator and one of the most attractive public rooms weve seen on a river cruiser, the Verandah Lounge, situated Aft, with glass doors all around and comfortable furniture for lounging as the banks of the river float past (during drydock, the lounge will be converted to a library). Additionally, Amadagio features a small spa, whirlpool, beauty salon and fitness facility.

Our near-full sailing took place around the Christmas holidays. AMAWATERWAYS, and a few other river cruisers, operate so-called “Christmas Markets” cruises from late November through December. These cruises visit the traditional Christmas Markets in Hungary, Austria and Germany.

Almost all cities and towns on the itineraries have some sort of Christmas activities as well as market stalls set up in a central area. Also available is traditional food (such as Lebkuchen — or Gingerbread) and drink (such as Gluehwein — or mulled warm red wine).

Nuremberg boasts the worlds largest Christmas market, with more than 100 red and white canvas-topped stalls offering an assortment of childrens toys, tinsel angels, dolls, Nutcrackers, dollhouses and more. Our cruise took place the week after Christmas, however, and some of the markets were closed.

One of the highlights of our cruise would take place not on the ship but during the included post-cruise program: two nights in Prague. We were looking forward to spending New Years Eve in the city that the German poet Goethe called “the prettiest gem in the stone crown of the world.” It seemed to be a perfect and appropriate way not only to end the year and begin a new one but also to conclude what had been a wonderful week floating past some of Europes grandest cities.

With its young fleet, AMAWATERWAYS new ships will appeal to those who prefer familiar foods (but with opportunities to try regional wines and specialities), a familiar language and a near all-inclusive cruise experience.